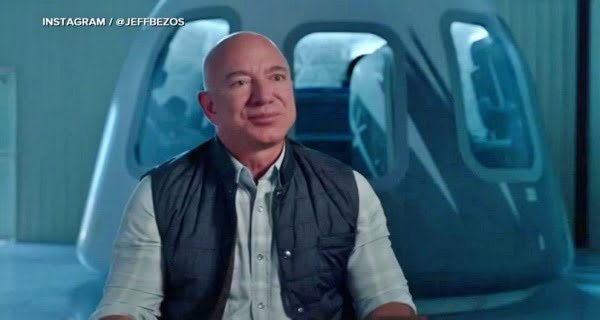 Washington: Industrialist Jeff Bezos, one of the world’s richest people, will board the first manned space flight of his company ‘Blue Origin’ to be operated next month.

Bezos said on Instagram early Monday that he, his brother and the winner of an ongoing auction will be aboard Blue Origin’s “New Shepherd” spacecraft that is scheduled to take off on July 20. In this trip, there will be a brief trip to space from Texas. July 20 also marks the anniversary of Apollo 11’s arrival on the moon.

Bezos said in early February that he wanted to step down as Amazon CEO to give more time to other tasks and focus on his company Blue Origin.

Bezos said on Instagram, “Looking at Earth from space changes you, it changes your relationship with this planet. I want to board this flight because it is something that I have always wanted to do in my life. It’s a thrill. This is very important to me.”

Auction bidding for seats in the New Shepherd vehicle ended on Saturday. The winning bid was valued at approximately $2.8 million, with over 6,000 participants from 143 countries.

Proceeds from this auction bid will be donated to the Blue Origin Foundation, which will be used in future projects to search for life in space.

65 WHO employees were found to be infected with the coronavirus

17/11/2020/10:01:am
Geneva: 65 employees of the World Health Organization (WHO) stationed at its headquarters have been found to be infected with the Corona Virus. An...

Firing during shooting of TV serial in Karachi Pakistan, 9 injured

03/06/2021/9:54:am
Karachi: During the shooting of a serial in 'Defense Housing Society' located in the Pakistani city of Karachi, a security officer opened fire, in...