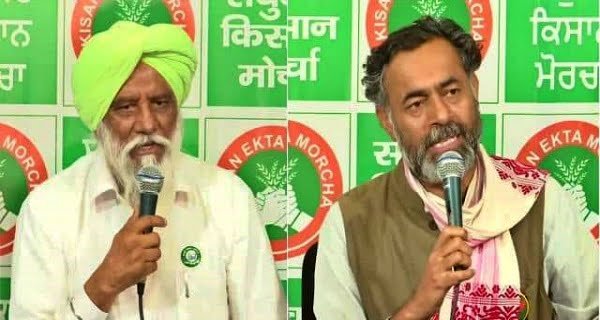 New Delhi: Farmer Organizations agitating about the Agricultural Bill have made a big announcement. In a press conference held on Tuesday, the United Kisan Morcha (Sanyukt Kisan Morcha) said, “We will go to the states in which elections are going to be held to oppose the BJP (BJP).” In this sequence, on March 12, we will rally in West Bengal (West Bengal). Which will be held in the capital Kolkata.

Movement on March 6
Former AAP leader and Swaraj India chief Yogendra Yadav said, “In today’s meeting of Samyukta Kisan Morcha, we have finalized the programs till 15 March. On March 6, when the protest enters Day 100, the farmers will stop the Kundli-Manesar-Palwal Expressway at various points between 11 am and 4 pm. ”

Will rally in every election state
Yadav said, “In the assembly elections, we will appeal to the people to punish the BJP and its allies who brought anti-farmer legislation. We will go to every state in turn. In this sequence, we will rally in West Bengal. The event will begin with a public meeting on 12 March in Kolkata. “

Demonstration across the country on 15 March
The Swaraj India chief said, “We have had meetings with 10 trade organizations. On March 15, workers and workers from across the country will take to the streets and protest outside the railway stations to protest against the privatization of the government sector.

30/01/2021
New Delhi: The IED blast occurred on Friday evening outside the Israeli Embassy on the Aurangzeb Road in the Lutyens area of ​​Delhi. However,...

America has suffered a lot in a few months, Covid has left deep and...

28/10/2020
Milwaukee (USA): Democratic Party presidential candidate Joe Biden said on Tuesday that anger and suspicion are growing in the country and wounds are deepening...

Dealing with China, India deployed skilled soldiers to fight in the mountains, speed up...

22/06/2020
New Delhi: After China's deception in the Galvan Valley of Ladakh, India is leaving no stone unturned to surround it. Amidst the ongoing tension...