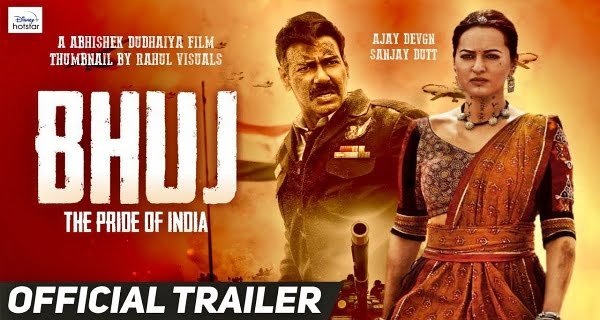 New Delhi: People are eagerly waiting for Bollywood veteran actor Ajay Devgn’s most awaited film ‘Bhuj: The Pride of India’. Apart from Ajay Devgan, Sanjay Dutt, Sonakshi Sinha, Ammi Virk, Nora Fatehi and Sharad Kelkar are also in the lead roles in this film. The look of Ajay Devgan and Sonakshi Sinha has already been revealed from this film. Now the first video of the film has also surfaced, which is quite a bang.

Giving a glimpse of the world of the 1970s in the motion poster of the film released today, it promises us powerful action sequences, heartwarming emotions, love, and patriotism. Nation and a mission that brings together many brave people of Bhuj for victory. Along with this, the release date of the film has also been revealed.

Let us tell you, this film will be released on August 13, 2021, on Disney + Hotstar VIP and Disney + Hotstar Premium. Also, you will be able to see the trailer of this film on 12 July 2021. Audiences have been waiting for a long time for Ajay Devgan’s patriotic and action-packed film ‘Bhuj: The Pride of India’.

Sonakshi Sinha will be seen in the role of Sundarben Jetha Madharparya in this film. She was a brave social worker, she supported the Indian Army along with 299 women. This brave army of women had prepared the runway for the army. Talking about the film, ‘Bhuj’ is a war action film, which is based on the true story of the Indo-Pakistani War of 1971. Ajay Devgan is playing the role of Indian Air Force Wing Commander Vijay Karnik. This is Abhishek Dudhia’s first film as a director.

30/08/2021/2:51:pm
New Delhi: The start of winning medals by Indian athletes in the Tokyo Paralympics on Sunday continued on Monday as well. Female shooter Avani...

01/03/2021/1:54:pm
Mumbai: Bollywood superstar Amitabh Bachchan is constantly in the news about his health. On Saturday, Big B suddenly told his fans about the surgery....