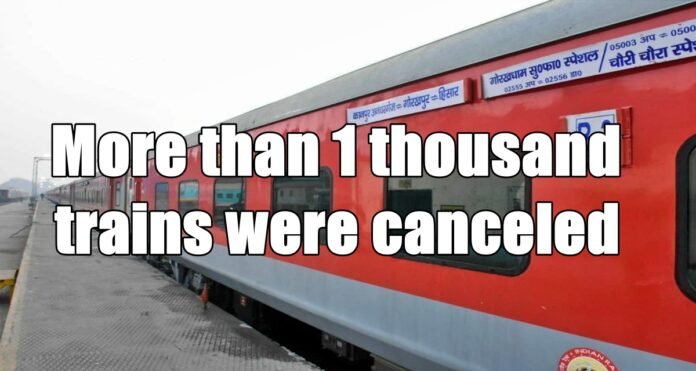 New Delhi: While the cold has increased due to the continuous bad weather, people are also facing a lot of problems in traffic. It rained at many places on Saturday as well. Severe cold is falling in the whole of North India. Due to fog in the late night, the visibility is very less. Bad weather is affecting the rail operations very badly.

Today, i.e. on 23rd January also, Indian Railways has completely canceled 1030 trains for the same reason. While 24 trains have been partially canceled. The trains which have been canceled include trains running between Uttar Pradesh, Punjab, Haryana, Maharashtra, New Delhi, Tamil Nadu, West Bengal, Gujarat, Bihar, and Jharkhand. In such a situation, if you are planning to travel by train somewhere today, then definitely find out if the train is canceled.

How to check train status?
For the convenience of railway passengers, the railways put the list of canceled trains on the railway website. Apart from this, its information is also available on the NTES app. To know the status of any train, one has to visit the railway website https://enquiry.indianrail.gov.in/mntes. By entering the number of the train here, you will be able to know its status.

31/07/2020/6:40:pm
New Delhi: India has given another blow to China in the ongoing dispute between India and China. The Indian government has banned the import...

18/12/2021/9:54:pm
New Delhi: Amidst the increasing cases of the Omicron variant, the third wave of corona in India may come at the beginning of the...

Coronavirus of dogs found in humans, no need to worry says Cambridge University

29/05/2021/9:11:pm
Cambridge: Scientists have detected a new type of coronavirus found in dogs in some people suffering from pneumonia. It may sound dangerous to say,...

How many SIMs have been activated from your Aadhaar, you can...