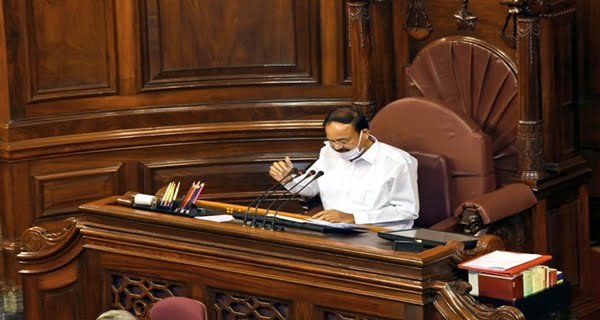 New Delhi: Rajya Sabha Chairman M. Venkaiah Naidu has urged the newly elected members of the House to uphold rules and procedures of the House while discharging their duties as the lawmakers of the country.

He was speaking after the administration of oath or affirmation to the new members of Rajya Sabha in the Chamber of the House today. Mr. Naidu urged them to hold themselves to account with regard to their conduct both within and outside the House, so as to enhance the standing of the institution in the eyes of the people.

The Rajya Sabha Chairman urged the newly elected members not to fall prey to the temptation of disrupting the proceedings of the House for short term gains. He exhorted them to be conscious of their noble responsibility toward enhancing the standing of the apex legislature in public esteem.

Mr Naidu suggested to the first time members of Rajya Sabha to enhance their knowledge about the history and contribution of the House during the last 68 years, the objectives and course of freedom struggle, making of the Constitution and the functioning of the Parliamentary institutions by reading standard books. He urged the seniors to guide the first-timers in understanding the functioning of the House.

Mr Naidu referred to the concerted efforts being made by the Centre and the State Governments and other stakeholders including frontline warriors like doctors, medical staff, security forces and media to contain the pandemic and expressed hope that normal life would be restored soon.

Earlier, 45 members took the oath of office in the Rajya Sabha chamber while following physical distancing norms. Members including three women took oath or affirmation in 10 languages, Telugu, Bodo, Kannada, Manipuri, Marathi, Odia, Tamil, Bengali, Hindi and English. In total, 61 members including 43 first-timers have been elected to the Upper house. The members who could not take oath or affirmation will do so during the ensuing Monsoon Session

How many members of which party in Rajya Sabha?
BJP-17
Congress – 9
JDU-3
4-4 of YSR Congress and Biju Janata Dal
3-3 members of AIADMK and DMK
2-2 of NSP, TRS and RJD, remaining seats were in the account of others who will be sworn in.
Today, many young and old faces of Congress were seen among the members who took oath. Among the newly elected MPs of the Congress who took oath today are: –

25/11/2021/10:52:pm
Geneva: There has been a stir in South Africa after getting a new variant of Corona. The World Health Organization (WHO) also discussed the...

Pak army chief Bajwa’s legs were trembling, sweat was on his forehead, he released...

12/04/2021/9:11:am
Haridwar: Where on one side the country is passing through the other uncontrollable wave of Corona infection. In such a situation, in the midst...

Who is the new US President Joe Biden? Learn the journey from the youngest...

08/11/2020/10:06:am
Washington: Democratic Party candidate Joe Biden is set to become the next President of the United States. According to US media, Biden defeated his...

Before Diwali, KIA Carens CNG will compete with Ertiga, know how...