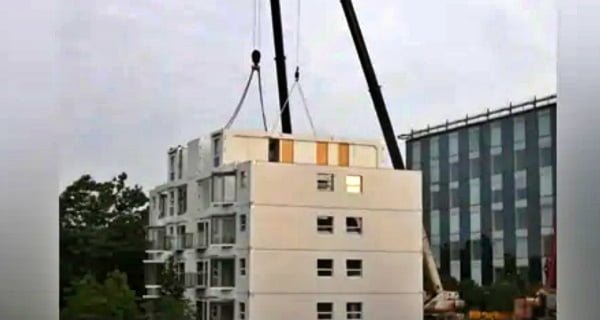 Beijing: It often takes years to build a building. Sometimes it takes months to just erect a building. But on the contrary, a building in Changsha, China, was built in just a few hours more than a day. Construction of this 10-story building company Broad Group has shaken the internet by constructing a 10-story residential building in just 28 hours and 45 minutes. The video of the speed of this construction work is now becoming fiercely viral on social media.

According to a CNN report, Broad Group has built a 10-story apartment building in Changsha, China in 28 hours and 45 minutes. By the way, it is being told that the technology of prefabricated construction systems has been used in erecting the building. In which the building is constructed by assembling small self-contained modular units.

In this technique, container-sized pre-fabricated units are transported to the construction site and assembled, followed by bolt fixing, to form a completely finished building. After the building is ready, electricity and water connections are added to it. After which it is handed over to the residents to live in.

The 4-minute 52-second video of this construction that went viral on the Internet can be seen with the speed with which this building was prepared. In the video, the building group explained that it was a “very simple onsite installation”, fixing the bolts and connecting the water and electricity and the building is ready.”

14/06/2020/7:24:pm
New Delhi: In an effort to guard against fake news being circulated on various platforms, we bring you our segment on Fact Checking and...

Travelers from 60 low-risk countries will no longer have to isolate in the UK...

04/07/2020/10:37:am
London: The UK announced on Friday that it will offer non-segregated international travel to people coming from around 60 countries with a low risk...