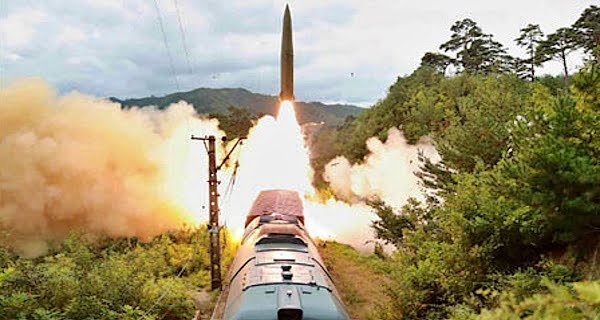 Pyongyang’s official Korean Central News Agency said the missiles, launched during an exercise by a missile regiment built on the train, accurately hit a sea target 800 kilometers (500 miles) away. In footage shown by state media, two separate missiles engulfed in orange flames are seen coming out of ‘rail-car launchers’ along the tracks in a dense forest. South Korea’s presidential office said it had tested its first underwater target on Wednesday afternoon.

It said that an indigenously built missile was fired from a 3,000-ton class submarine and it covered a predetermined distance before hitting its intended target. Earlier, South Korea’s military said on Wednesday that North Korea had tested two short-range ballistic missiles. On Monday, North Korea said it had tested a newly developed cruise missile for the first time in six months. Experts say North Korea’s resumption of missile tests may be aimed at putting pressure on US President Joe Biden over nuclear talks.

South Korea generally does not make public information about its high-profile weapons tests because some experts believe it could unnecessarily provoke North Korea. Observers believe that Moon Jae-in’s government may be responding to criticism that it has taken a too soft stance against North Korea.

15/10/2020/10:36:am
Paris: Coronavirus has caused havoc in many countries of the world. At the same time, most countries are still struggling with it. But there...

01/08/2022/9:51:am
BEIJING: Speaker of the House of Representatives, the lower house of the US parliament, Nancy Pelosi on Sunday confirmed her visit to four Asian...

Covid-19 was not developed as a biological weapon: US intelligence community