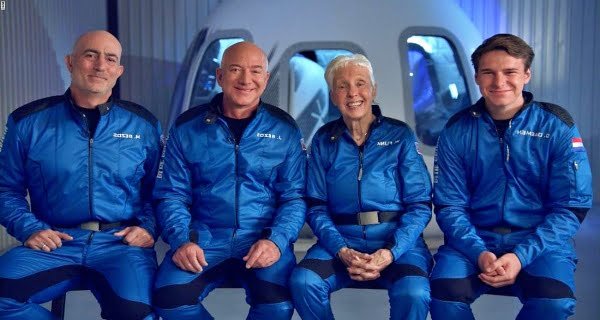 Texas: Blue Origin capsule carrying the wealthiest man on the planet Jeff Bezos, his younger brother Mark, an 82-year-old female pilot, and a high school graduate touched down in the west Texas desert after breaching the boundary of space, the company’s live broadcast showed.

The spaceship floated down on three giant parachutes before firing a retro thruster, sending up a cloud of sand as it gently landed at one or two miles (kilometers) an hour. “A very happy group of people in this capsule,” said Bezos.

Blue Origin’s first crewed mission, an 11-minute hop from west Texas to beyond the Karman line and back again, coincided with the 52nd anniversary of the first Moon landing.

“It’s dark up here,” said barrier-breaking female aviator Wally Funk, one of the four crew along with Bezos, his brother and 18-year-old Dutchman Oliver Daemen, who will become the youngest astronaut.

But Blue Origin’s sights are set higher: both in the altitude to which its reusable New Shepard craft will ascend compared to Virgin’s spaceplane, but also in its ambitions.

Bezos, 57, founded Blue Origin in 2000 with the goal of one-day building floating space colonies with artificial gravity where millions of people will work and live. Today, the company is developing a heavy-lift orbital rocket called New Glenn and also a Moon lander it is hoping to contract to NASA.

New Shepard has flown 15 uncrewed flights to put it through its paces and test safety mechanisms, like firing the capsule away from the launchpad if the rocket explodes, or landing it with one less parachute.

Lift-off was slightly delayed and came at 1312 GMT from a remote facility in the west Texas desert called Launch Site One, some 25 miles (40 kilometers) north of the nearest town, Van Horn.

“Today is just the first of many flights to come on New Shepard,” Blue Origin’s sales director Ariane Cornell said in a Livestream, adding ticket sales were now open.

Richest, Oldest, Youngest
Notably absent from the flight is the still anonymous winner of a $28 million auction for a seat, who had “scheduling conflicts” and will take part in a future flight.

Daemen’s father, the CEO of a private equity firm, was a runner-up in the bidding, allowing his teenage son to become the company’s first paying customer.

The capsule separated from its booster, and when it got high enough, the astronauts unbuckled and experienced weightlessness for three to four minutes.

The spacecraft peaks at about 65 miles altitude (106 kilometers), allowing the crew members to admire the curvature of the planet, and the inky black of the rest of the universe.

The booster returned autonomously to a landing pad just north of its launch site, while the capsule freefalls back to Earth with three giant parachutes, and finally a thruster, for a gentle landing in the desert.

Blue Origin has remained relatively coy about what comes next. The company says it plans two more flights this year, then “many more” next year.

Analysts say much will hinge on early successes and building a solid safety record. CEO Bob Smith revealed Sunday that the next launch could take place in September or October, adding “willingness to pay continues to be quite high.”

At the same time, the sector is beginning to face criticism over the optics of super-wealthy individuals blasting off to space while Earth faces climate-driven disasters and a coronavirus pandemic.

“Could there be a worse time for two uber-rich rocket owners to take a quick jaunt toward the dark?” wrote Shannon Stirone in an Atlantic piece titled “Space Billionaires, Please Read the Room.”

02/03/2021/10:21:am
Raipur: The results of Constable Recruitment in Chhattisgarh Police have been released. This is the first time that 13 kinnars (third gender) will also...

10 killed in violence in rebel-held territory in Syria

22/06/2021/9:30:am
Beirut: At least 10 people were killed in northwestern Syria on Monday in shelling between Syrian government forces and rebel groups. Government media and...

WHO warning, corona’s third and fourth wave may come soon