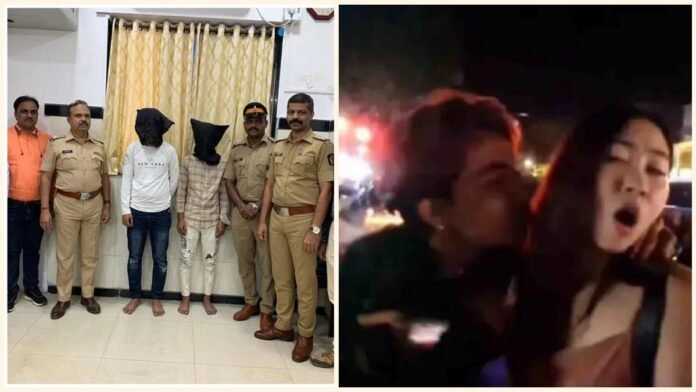 Mumbai: After molestation of a Korean woman in the Khar area of ​​Mumbai, the capital of Maharashtra, the police swung into action. Acting immediately, the Mumbai Police team arrested both the accused. The Mumbai Police team has arrested 19-year-old Chand Mohammad and 20-year-old Mohammad Naqib Ansari. At the same time, after this incident, the statement of a Korean woman who is a YouTuber has come to the fore.

The South Korean woman said, “This happened to me in another country as well, but I couldn’t do anything to call the police at the time.” Action is being taken very fast in India. I have been in Mumbai for more than 3 weeks, and plan to stay longer. I don’t want this one bad incident to ruin my entire trip and my passion to show other countries amazing India, said the South Korean woman. Waste it away

Explain that after the arrest, the police produced the accused Chand Mohammad, 19, and Mohammad Naqib Ansari, 20, in the court, where they were sent to police custody for a day.

This is the whole matter
The victim, a citizen of South Korea, was doing ‘live streaming’ in suburban Khar area when the incident happened around 8 pm. It is seen in the video that the youth came very close to the woman and tried to pull her by holding her hand even when she resisted.

As the woman started to leave the scene, the same man again appeared on a motorcycle with a friend and offered to drop the woman to her destination, which the woman declined in broken English

27/10/2020/8:54:pm
New Delhi: Ankhi Das, Public Policy Head of Facbook India, has left the company. This information is provided by Facebook. A statement from the...

29/12/2022/8:17:pm
New Delhi: A Chinese woman, Miss Song Xiaolan, has been taken into custody by the police on Thursday near Kalachakra Maidan in Bodh Gaya,...

16/08/2020/10:14:pm
New Delhi: Coronavirus epidemic may delay the sending of India's unmanned space mission under the first phase of 'Gaganyaan' which is planned for launch...

22/05/2021/9:40:am
Gaza City: Thousands of Palestinians celebrated on Friday after a ceasefire took effect in Gaza with Israel's declaration. Many of them said the war...

Shrimad Bhagwat Geeta will be included in syllabus of Himachal Board