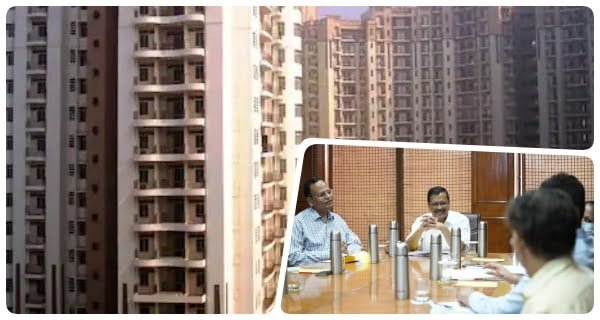 New Delhi: Review of the progress of the meeting, CM Arvind Kejriwal directed the officials to expedite the allocation of flats prepared under the scheme ‘Jhuggi Vyaan Houses’. The Chief Minister said that any problems coming under this scheme should be brought to my notice so that the families living in slums will be shifted to the flat soon and they can live life with respect. Cabinet Minister Satyendra Jain, Dusib, and senior officials of DSIIDC were also present in this meeting.

By 2025, there will be so many flats
Significantly, the Delhi government is providing flats in different areas of Delhi to the families living in slums under the ‘Where the slum, house there’ scheme. Under the scheme, 52,344 flats are being built by Urban Shelter Improvement Board (Dusib) and DSIIDC in the first phase.

Flats are being built on 237 acres of land
89,400 flats are to be built in three phases for the homeless families living in slums under the ‘Jhuggi Vahi Hwaan’ scheme. These flats will be built in about 237 acres of land in various areas of Delhi. The Delhi government is building 52,344 flats in the first phase and these flats will be built and allotted by 2022, while in the second phase about 18 thousand flats are to be built. After shifting to the homeless families in the flats built in both these phases, the remaining flats are to be built under the third phase on the land that will be vacant. The target of completing all three phases by 2025 has been set.

4833 flats have been allotted to homeless families
On Thursday, CM Arvind Kejriwal met and reviewed in detail the flats under construction and the allotted flats under the scheme. During this, Dubis officials informed the CM that he is constructing 18,084 flats. All these flats are almost ready. In the meeting, officials told that 34,260 flats are being built by DSIIDC. Of this, 17,660 flats are ready, while 16,600 flats are under construction. Apart from this, the officials informed that 4833 flats have been allotted to the homeless families living in slums, while the process of allocation of 7031 flats is underway and will be allotted soon.

The Kejriwal government has been working for years on the plan to shift the families living in slums in various areas of Delhi to flats. The Delhi government is arguing that people living in slums also have the right to live with dignity.

21/08/2020
The data of about 23.5 million users of Instagram, Tittock and YouTube has been leaked. Personal profiles of all users are present on the...

04/10/2020
ISLAMABAD: Pakistan International Airline (PIA) (FIA) fired 54 more employees due to fake degrees, use of drugs, and poor performance. According to the...

Three killed in rainfed incidents in Odisha and Jammu, possibility of heavy rains in...