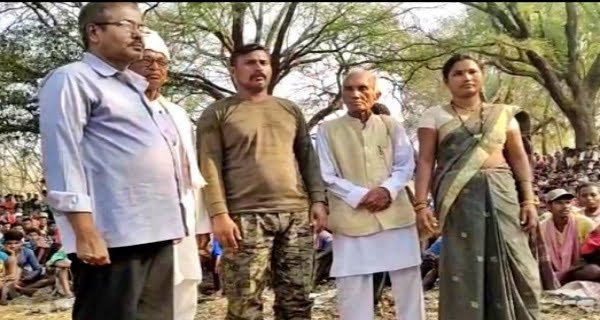 Please tell that 22 security forces personnel were killed in an encounter with Naxalites in the border area of ​​Sukma and Bijapur district of Dhruv in the state. While 31 other jawans were injured. Rakeshwar Singh Manhas, a soldier of the CRPF 210 Cobra Battalion, was missing since the incident. During the search for the missing jawan, on Tuesday, the Maoists had issued an alleged statement informing the jawan Rakeshwar to be in their possession and said that till the state government announces the names of the intermediaries to release the jawan, he will send the jawan Will keep in possession The Maoists had not made any other demand except this.

On the other hand, getting information about the abduction of Rakeshwar Singh, his family members in Jammu were constantly pleading with Prime Minister Narendra Modi for his release. On Wednesday, people of several villages including Phangali, Bhorpur, Danpur, Mattoo, Chak Malal, demonstrated in Khowar to free Rakeshwar Singh from Naxalite occupation. During this time the Akhnoor-Palanwala main road near the village Mattu Puli was closed.

At the same time, there is a happy atmosphere in her family as soon as the news of her husband’s release is received. The young man’s wife Meenu Manhas said, “I thank God, the Central and Chhattisgarh government, the media and the army.” Today is the happiest day in my life. “

Kunti Devi, mother of Cobra Jawan said, “We are very happy. I also thank those who are leaving our son. I also thank God. When the government was talking, I had some faith but I could not believe it.

The SP of Bijapur said, “As soon as we came to know that one of our jawans is in the custody of Naxalites, at that time we started efforts to get them released.” Right now Dr. Rakeshwar Singh is under medical examination of Manhas. ”

18/08/2020
Clean Survey Campaign 2020: Prime Minister Narendra Modi will announce the results of the fifth edition of the nationwide annual cleanliness survey 2020 on...

Rajiv Sharma revealed, gave information about many including Dalai Lama

20/09/2020
New Delhi: On Saturday, a special cell of Delhi Police arrested a journalist on charges of spying for China. The accused journalist named is...

25/09/2020
Luxembourg:  Eighth paragraph of release dated September 22, 2020 should read: The two companies will make joint investments in Azure Orbital ground stations for the...