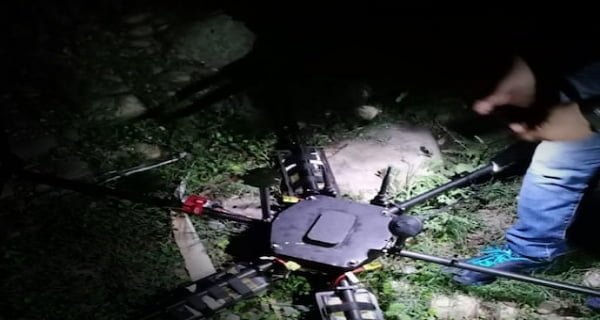 Jammu: Security forces today thwarted a major terror attack in Jammu and Kashmir by foiling a bid of dropping Improvised Explosive Devices (IED) in Jammu from across the International Border by the use of a hexacopter.

The Jammu and Kashmir police late-night shot down a hexacopter in the Kanachak area in the Akhnoor sector, the drone had entered six to seven kilometers inside the Indian territory and was carrying an IED weighing around five kgs.

“The Hexacopter was shot down by the alert Jammu and Kashmir police personnel in the area, a bullet has hit the hexacopter after which it came down, an IED weighing five kilograms was attached to the hexacopter”, a senior police officer told. He said that the IED was packed in the packaging material and was meant to be assembled later so as to carry out the terror attack at a later time.

“The investigations have started and we are searching the area and gathering evidence to find out who was supposed to pick the IED from the area after it was dropped”, the officer said.

On the same day, security forces arrested a terrorist identified as Nadeem from the Narwal area of Jammu who was carrying an IED weighing around 5.5 Kg, which was again dropped using a drone. Nadeem was tasked by his handlers from across the border to carry out the IED attack in the crowded places across the Jammu region.

During Nadeem’s questioning, he releveled that he was in contact with his handlers in Pakistan using social media and that he had picked up the IED from near the international border after it was dropped by the drone. On Nadeem’s information, two more terrorists were arrested one from Shopian and the other one from the Banhial area of Ramban district.

Post the attack on Jammu Airforce station there have been more than a dozen drone sightings near the vital military installations across the Jammu region. Security agencies have been put on high alert across Jammu and Kashmir as they have inputs that terror outfits are planning to launch terror attacks at vital security installations across the Union territory by using sophisticated drones.

22/09/2020/10:54:am
Riyadh: Saudi Arabia on Monday released new details on how to slowly begin the pilgrimage to Mecca, a bandh that has been closed for...

Speaking on the Indian farmers’ protest, the PM of Canada said, “We will always...

01/12/2020/9:06:pm
Toronto: The Prime Minister of Canada Justin Trudeau has said that his country will always defend the right to peaceful protests. He expressed concern...