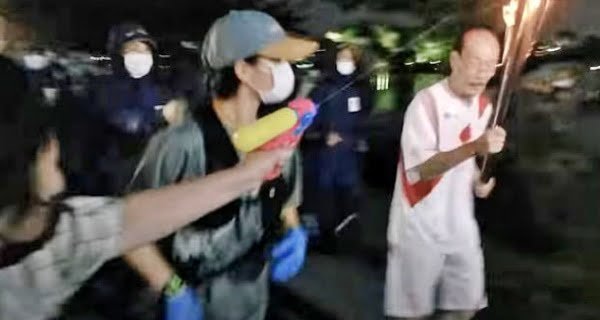 Japan: Preparations for the Olympics are going on in Tokyo, Japan amidst the shadow of Corona. Meanwhile, a shameful incident has come to light in a city in Japan where a woman tried to extinguish the Olympic torch with water. However, she was arrested on the spot.

Woman raised slogan said stop Olympics
Actually, according to a report in Daily Mail, this incident happened at a place called Mito in Ibaraki city of Japan. This woman came from somewhere in a rally going out for the Olympic torch here. The woman then tried to extinguish the torch with a small gun filled with water. During this, the woman was also raising slogans. The woman was saying stop the Olympics, stop the games. After this, the woman started throwing water on the torch. However, even after the woman’s efforts, the flame of the torch did not go out. The security officers present on the spot stopped the woman and took her into custody. The video of this incident has also gone viral. According to the report, the name of the 53-year-old accused woman is Kayoko Takahashi.

Woman admits her mistake
The woman has been accused by the police of deliberately targeting the runner and interfering in the relay. The local police officer has told that the woman has accepted her mistake. It was also informed that there has been no delay in the torch rally due to this incident.

Let us tell you that due to Corona, a lot of caution is being taken in the preparations for the Tokyo Olympics. Organizers are also facing opposition. Earlier, due to fear of Corona, some stages of the Olympic torch relay were removed from the streets of the capital of Japan.

07/10/2020/11:01:am
Taipei: According to a new Pew Research Center survey, negative attitudes towards China have risen sharply in many developed countries of the world, particularly...

11/11/2020/10:29:am
New Delhi: The Congress on Tuesday alleged that the counting of votes in the Bihar Vidhansabha Election has gone awry. He also accused the...

Bunkers are in discussion during Russia-Ukraine war, know how safe they are, how...

11/03/2022/11:19:pm
New Delhi: During the war between Russia and Ukraine, the mention of bunkers is also coming repeatedly, how both countries have built bunkers for...