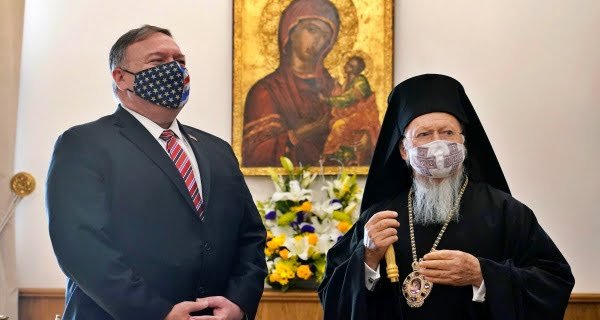 Istanbul: US Secretary of State Mike Pompeo on Tuesday met with a spiritual leader of the Orthodox Christian religion in Istanbul. Turkey is angry that Pompeo met with the Orthodox leader during his brief visit to Istanbul and did not meet with any Turkish official.

Pompeo, who has traveled to seven European and West Asian countries, shared a photo in which he is greeted by Ecumenical Patriarch Bartholomew I, the leader of the world’s 300 million Orthodox Christians.

The US Secretary of State is also scheduled to meet with Archbishop Paul Russell of Turkey. The issue of religious freedom was discussed in Turkey, which angered Turkey, and officials here called on the United States to focus on human rights in their country.

Last week, Turkey also reacted sharply to Pompeo’s plans to meet with the Christian leader, saying Washington should look into its own plight and address issues of racism, Islamophobia and hate crimes. Should focus on.

Despite this, Pompeo met with the Christian leader and tweeted on Tuesday, “Orthodox world leader Bartholomew is an important partner and we will continue to work for religious freedom in the world.” Pompeo also plans to visit Israeli settlements in the West Bank destined for Palestine, where former US Secretary of State has avoided.

14/06/2021/5:14:pm
Elon Musk did it again! Bitcoin price climbed above $39,000 after Tesla chief executive had indicated that electric carmaker will resume transaction with cryptocurrency....

1 thousand 50 rupees paid of premium, amount of 1 rupee received in the...