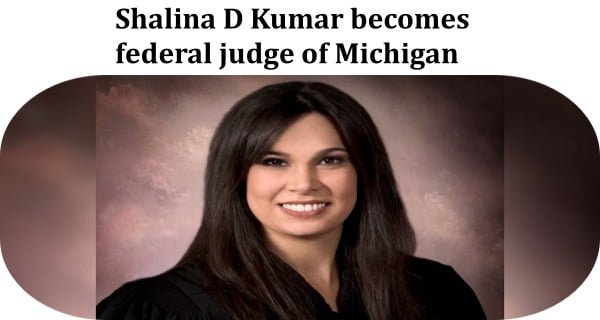 New York: The name of another Indian judge has been included in the list of judges of US President Joe Biden. The President has nominated Shalina D Kumar as the Federal Judge of Michigan. Shalina is not only the first Indian to become a federal judge of Michigan, but she is also the first Asian to reach this position.

The White House informed that Shalina D Kumar has good knowledge of both civil and criminal matters. Shalina D Kumar has been serving on the Oakland County Sixth Circuit Court in the Eastern District of Michigan since 2007. He was appointed Chief Justice of the same court by the Michigan Supreme Court in 2018.

While serving as the Chief Justice, Shalina has had experience in both civil and criminal cases. Apart from this, Shalina has held many other important positions. Shalina will be the first South Asian-origin judge in Michigan. Shalina graduated from the University of Michigan in 1993 and studied at the University of Detroit-Mercy School of Law in 1996.

On August 20, 2007, former Michigan Governor Jennifer Granholm appointed Shalina to be a judge of the Sixth Circuit Court in Oakland County, to fill the vacancy caused by the retirement of Judge Jean Schnelz. After this, Shalina was elected to the court in 2008 and then in 2014 she was again elected to the post of judge.

01/10/2020/11:13:pm
Berlin: Russia's opposition leader Alexei Navalny, in a statement released on Thursday, accused Russian President Vladimir Putin of being behind the attack by giving...

16/08/2020/8:00:pm
Mumbai: The Meteorological Department has issued a 'Red Alert' for sporadic heavy rains at isolated places in Pune and Satara districts of Maharashtra on...