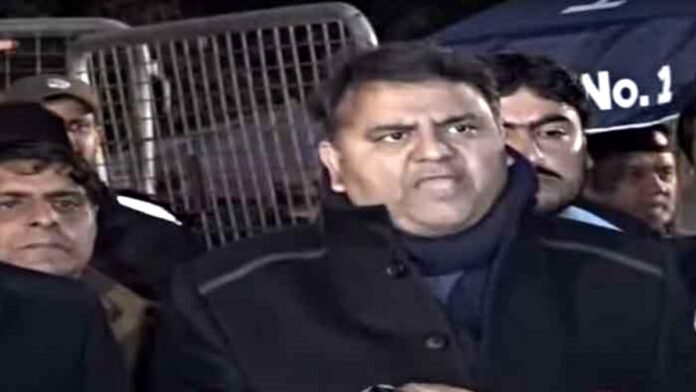 Lahore: The condition is bad due to the economic crisis in Pakistan. Meanwhile, a lot of political upheavals are also happening. Now the big news is coming out that Fawad Chaudhary Arrested, who was a minister in Pakistan Tehreek-e-Insaf (PTI) and Imran Khan government, has been arrested by the police. In fact, Fawad challenged the Sharif government outside Zaman Park, the official residence of Imran Khan. After this, he was returning home when the Lahore police arrested him.

Earlier the news was that Lahore police can arrest Imran Khan. After this, Imran’s supporters came outside his house late at night. The news of the arrest of PTI chief Imran Khan was coming from the early hours of Wednesday. Meanwhile, PTI announced on its official Twitter handle that ‘there are reports that the puppet government will try to arrest Imran Khan tonight’.

Significantly, the Election Commission of Pakistan issued arrest warrants against Imran Khan, Fawad Chaudhary, and Asad Umar. Talking to the media late at night, Fawad Chaudhary attacked the Shehbaz Sharif (Pakistan PM Shehbaz Sharif) government a lot. According to Geo TV, Fawad strongly condemned the actions of the government and accused Shehbaz Sharif of conspiring to destabilize the country. At the same time, he termed the people involved in the alleged conspiracy as traitors.

Choudhary defiantly said that if the police have the courage then they should come and arrest Imran Khan. On the other hand this morning PTI leader Farooq Habib posted a video confirming the arrest of Fawad Chaudhary in a tweet. Posting the video, he wrote, ‘The imported government has gone mad’.

17/07/2020/10:27:am
Mumbai: According to the news that has just arrived, 23 people have been rescued so far from the demolished Bhanushali building in Fort, Mumbai...

India distances itself from UN resolution on Russia’s ‘illegal referendum’

02/10/2022/12:29:pm
Russia: India on Friday abstained from voting on a draft resolution tabled by the United States and Albania at the United Nations Security Council...

03/02/2023/5:31:pm
Puss In Boots: The Last Wish - Only In Theaters this Christmas This holiday season, everyone’s favorite leche-loving, swashbuckling, fear-defying feline returns. For the...

Conflict between Pakistani army and Taliban deepened, 4 killed due to...