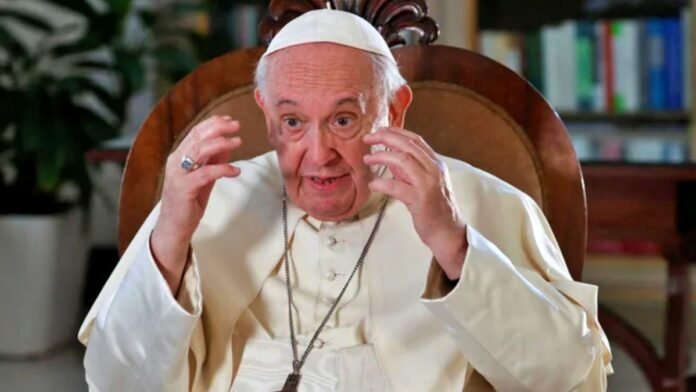 VATICAN CITY: Pope Francis has condemned laws criminalizing homosexuality as unjust, saying God loves all his children just as they are. The Pope called on all Catholic bishops who support the laws to welcome LGBTQ people into churches. Pope Francis Tuesday ‘AP’ Said in an interview, “Being gay is not a crime.” He acknowledged that Catholic bishops in some parts of the world support laws that criminalize homosexuality or discriminate against the LGBTQ community.

He attributed this to the cultural background and said that all bishops must go through a process of transformation for the dignity of the people. Organizations working against such laws ‘Human Dignity Trust’ According to the UN, consensual same-sex sexual activity has been criminalized in 67 countries, of which 11 are punishable by the death penalty. According to experts, even where the laws are not enforced, people of the LGBTQ community continue to be humiliated, harassed, and stigmatized.

Experts also said that more than a dozen states in the US still have laws against promiscuous sex on paper, despite a 2003 Supreme Court ruling declaring them unconstitutional. Describing such laws as unjust, Francis said that the Catholic Church can ban them and they should work in this direction. He said that homosexuals should be welcomed and respected and should not be discriminated against. He said, “We are all children of God and He loves us just the way we are.”

Such laws are common in Africa and West Asia and date from the British colonial period or have been influenced by Islamic law. Francis also said that in the context of homosexuality, there is a need to understand the difference between crime and sin. He said, “Being gay is not a crime. Yes, but it is a sin. But first, understand the difference between sin and crime. Not helping someone is also a sin. He was referring to Catholic teachings that consider homosexuality a sin.

In reference to China, he said, “We should tread with patience in China”. He sees continued dialogue with Beijing as vital in his efforts to protect China’s minority Christian community. On the question of relations with China, Pope Francis said, “We are taking steps. Each case (of the nomination of bishops) is looked into with great care. It is important that the dialogue does not break down.

21/10/2022/10:43:am
Astronomers have found an extraterrestrial planet whose density is very low (Low-Density Exoplanet) in a shocking discovery. It has been found to be the...

Countdown for ISRO’s first PSLV launch of 2022 begins today, 3 satellites to be...

Neera Tandon may become the first Indian-American woman to head the...

European countries forced to buy gas in rubles from Russia