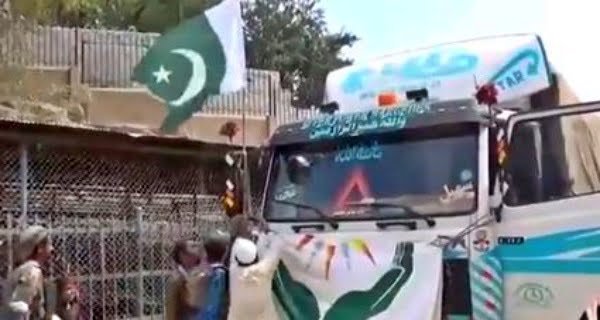 Kabul: Pakistan is continuously supporting the Taliban government in Afghanistan in every way. Whether it is the fight for the capture of the Taliban on Panjshir or the solution to the problems being faced in government formation. In every way, Pakistan seems to be standing with the Taliban. But the picture that is visible on the ground level is telling something else.

Actually, Pakistan sent some relief material in connection with the help of the Taliban, but the trucks through which the goods were sent had their flags on them, which were removed by some Taliban guards on the border itself. The video of this entire incident has also surfaced which is now becoming increasingly viral on social media.

It is being told that about 17 trucks coming from Pakistan from the Torkham border were removed by the border security guards of the Taliban from one of these trucks. Pakistani users have expressed their displeasure on social media after the video of the incident surfaced. Seeing the growing case, the Taliban has also taken action against the accused. Taliban spokesman Zabiullah Mujahid has said on this matter that action has been ordered against those who are guilty in this case. He said that all the leaders of the Taliban have expressed grief over the incident.

It is being told that Pakistan had sent 278 tonnes of food items in trucks filled with relief material. These included 65 tonnes of sugar, three tonnes of pulses, 190 tonnes of flour, 11 tonnes of cooking oil, and 31 tonnes of rice.

Pakistan’s Ambassador to Afghanistan Mansoor Khan tweeted that Pakistan has started helping Afghanistan. Our CG Jalalabada Abdullah has received 13 trucks of food items from the Pak-Afghan Cooperation Forum and these trucks will be sent to different provinces of Afghanistan. The remaining 4 trucks have been received by Maulvi Mubariz in Nangarhar, Afghanistan.

29/07/2021/10:42:pm
Perryville (USA): A tsunami warning has been issued for Hawaii following a magnitude 8.2 earthquake off the Alaska Peninsula. According to the Honolulu Star-Advertiser,...

AC travel will be cheaper, the first train of AC3 economy class will run...

16/10/2020/10:58:pm
Lucknow: The Yogi government is constantly under attack from the opposition for the increasing crime against women and the law and order situation in...

12/02/2021/10:41:am
Bikaner: The tremors of the Earthquake were felt in the major city of Bikaner in western Rajasthan on Friday morning. According to the National...