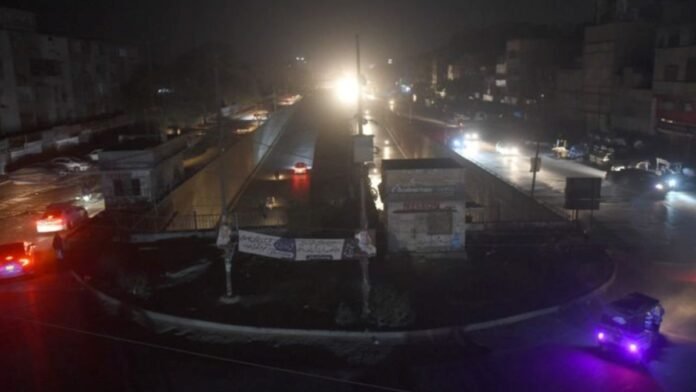 Karachi: Due to a fault in the National Grid in Pakistan today, the power supply in the entire country stopped at once, now a new crisis has come to the fore in front of Pakistan, which is facing a financial crisis. It is being told that it may take 72 hours for Pakistan’s electricity to recover. That is, there will be darkness in the neighboring country of India for 3 days. According to media reports, 90 percent of Karachi is without electricity, while most of the country including Quetta, Lahore, and Islamabad is affected by the power supply.

There has been an outcry in the whole of Pakistan due to the simultaneous power outage. Motorists drive through a residential area during a blackout in the port city of Karachi. This picture is from 2021 when there was a power failure in Pakistan like this year.

After a power failure, the condition of Rawalpindi becomes something like this. Seeing the economic benefits, Pakistan temporarily closed the power-generating factories on winter nights to save fuel. Since then Pakistan has plunged into darkness.

Pakistan’s residential area looks something like this due to a power failure in Karachi. Pakistan’s Energy Minister Khurram Dastgir Khan claimed that the power supply to some grid stations has already been restored, and it will take 72 hours to restore the power supply completely.

Islamabad, the capital of Pakistan looks like this after a power cut. See in the pictures of 2021, how bad the condition of Pakistan was, which has become like this again.

After the power cut, Rawalpindi becomes a completely dark city. According to the report, 90 percent of Karachi is without electricity.

China, not in favor of WHO’s proposal theory of leaking coronavirus from Wuhan Lab,...

01/04/2021/10:02:am
Beijing: China on Wednesday said that where the origin of Corona Virus originated, it should be investigated in other countries including America. The Chief...

Indian CA gets five and a half years jail for forgery and money laundering...

14/05/2022/9:33:am
London: An Indian-origin Chartered Accountant (CA) in the UK has been sentenced to five and a half years in prison for forgery and money...

Glamanand Supermodel India 2021 Winners on the Cover of TMM

14/03/2022/10:40:pm
New Delhi: International Kabaddi player Sandeep Nangal was shot dead during a match on Monday. During an ongoing Kabaddi Cup in Mallian village of...