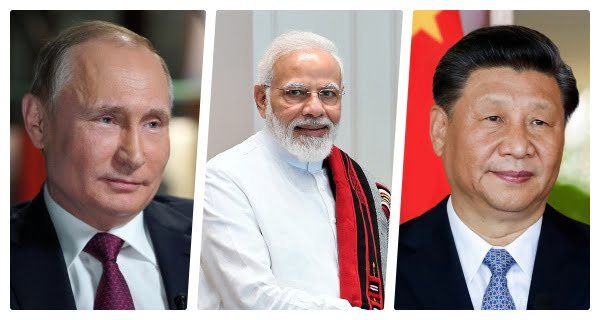 St Petersburg: Russian President Vladimir Putin on Saturday stressed that Prime Minister Narendra Modi and Chinese President Xi Jinping Both are “responsible leaders” who are capable of resolving issues between the two countries. He said it was important that “no power outside the region” should interfere in the process.

Russia’s partnership with India, no contradiction in the relationship between Moscow and Beijing
Amid Russia’s publicly criticizing the four-nation grouping of the Quad (India, the US, Japan, and Australia), Putin told PTI how a nation should participate in an initiative and how they should be able to support other countries. It is not for Moscow to assess the extent to which relations should be established with one, but no partnership should be for the purpose of uniting against another. Putin’s remarks in response to a question about Moscow’s opinion on the Quad and India’s inclusion in the grouping came in the backdrop of China’s claim that the grouping of nations was bridging Beijing’s influence in the strategic Indo-Pacific region. designed to control. He stressed that there is no “contradiction” between Russia’s partnership with India and the relationship between Moscow and Beijing.

We have very deep and strong relations with India
Responding to a question on the growing closeness between Russia and China and its impact on India-Russia security and defense cooperation, Putin said that the relations between India and Russia are growing rapidly and successfully and these relations The basis of ‘faith’. “We deeply appreciate this high level of cooperation with our Indian friends. These relations are of strategic nature. We have wide cooperation in many fields from economy to energy, high technology. As far as the defense sector is concerned, I do not mean just Russian arms purchases… We have a very deep and strong relationship with India, which is based on trust.

We are not joining the Quad: Putin
Asked about Russian Foreign Minister Sergei Lavrov’s criticism of the Quad as “Asian NATO” and his opinion on India’s participation in the grouping, Putin said, “We are not joining the Quad and no one else.” It is not mine to assess the country’s involvement in any initiative, each sovereign nation has the right to decide with whom and to what extent they wish to enhance their relations. All I believe is that the purpose of any partnership between countries should not be mobilization against any other nation, not at all.”

26/03/2021/9:40:pm
Islamabad: Despite Prime Minister of Pakistan Imran Khan being infected with Corona Virus, he appeared before his media team and held a meeting after...

04/11/2020/11:02:am
Washington: Voting ends in the US Presidential Election 2020. Meanwhile, Donald Jr., the son of Republican candidate Donald Trump, has posted a controversial map...

07/08/2020/12:03:am
Washington: Indian-American physician Hiral Tipirneni has won the Democratic Party primary election for the US House of Representatives from Arizona. In this seat, he...

Now Facebook can read your mind, know how it will work