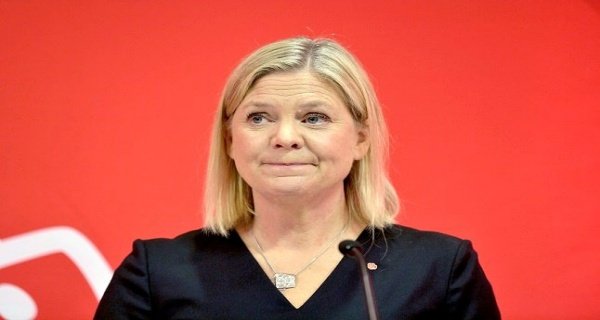 Copenhagen: Sweden’s parliament on Wednesday elected Magdalena Andersen as prime minister. She will be the first woman to hold this position. Anderson has been elected the new leader of the Social Democratic Party. She will replace Stefan Lofven, who resigned as prime minister earlier this year. Lofven is currently handling the responsibility of the caretaker prime minister. Anderson was previously the Finance Minister.

Sweden is considered one of Europe’s most progressive countries in terms of gender equality, but so far no woman has been given the reins of the country. In such a situation, this development is being considered a milestone for Sweden. “Democracy cannot be complete if women just keep on voting and are not elected to the highest office,” independent lawmaker Amina Kakabaweh, who supported Anderson, said in her speech in parliament.

In Sweden’s 349-member parliament, 117 lawmakers voted in favor of Andersen and 174 against. 57 MPs did not take part in the voting while one MP remained absent. Altogether 174 MPs voted against Andersen, but according to the Swedish constitution, if at least 175 MPs are not against a person, he can be appointed prime minister.

27/01/2021/9:35:pm
Washington: Former US President Donald Trump may avoid hearing the impeachment trial because the Democratic Party has not been able to muster enough support...

07/02/2021/10:18:pm
Washington: Meena Harris, the niece of U.S. Vice President Kamala Harris, found it overwhelming to support the peasant movement in India. Attacks against them...

18/02/2021/10:03:am
Moscow: An Unmanned Cargo Vehicle from Russia arrived at the International Space Station on Wednesday with supplies. The 'Progress MS-16' cargo vehicle was launched...

Protests across the country against Netanyahu surrounded by corruption charges

11/10/2020/10:03:am
Tel Aviv: Tens of thousands of people demonstrated in different parts of the country to demand the resignation of Prime Minister Benjamin Netanyahu of...

24/02/2021/10:18:am
Brasilia: Football Legend Pele, one of the world's greatest football players, has shocked everyone by making a sensational revelation about his life. Recently, Netflix...