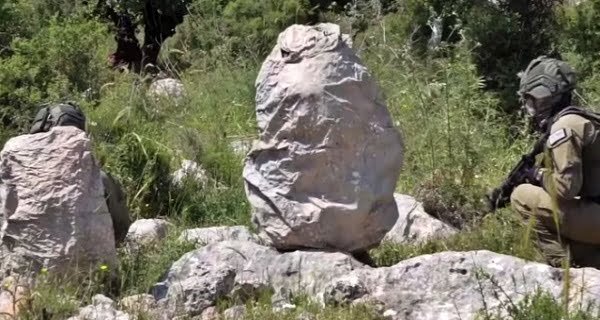 Tel Aviv: Israel beats many powerful countries in terms of making weapons of war. Now the Israeli Ministry of Defense has done a tech innovation. Under this, a special Camouflage Sheet has been made, which makes the soldiers invisible as soon as they are covered. After wrapping both its sides on itself, the soldiers look like a big rock. The kit-300 weighs only 500 grams, so soldiers in the war zone do not have trouble carrying it around.

Both sides of the net are designed differently
According to the Israeli Defense Ministry, the biggest thing about the Chemoflage Net is that after it is lit, the soldiers cannot catch the enemy even with thermal detectors. Both sides of this special net are designed differently. The first side is made according to the dense green areas. The other side is made for dry and desert areas.

Polaris Solutions designed this net
This innovative net has been developed by Polaris Solutions Company in partnership with the R&D unit of the Israeli Defense Ministry. Polaris claims that to keep soldiers virtually invisible, we have made Camouflage. Asaf Picciotto, CEO of Polaris Solutions, says that we got its inspiration during the Lebanon war in 2016. Picciotto was in the Special Security Forces at that time.

Hence the need
Asaf Picciotto, CEO of Polaris Solutions, says, “We found that there was a dire need to protect the soldiers on the battlefield with thermal and night vision equipment. We have to stay one step ahead of the enemy. That’s why Kit-300 worked. We tested it in several units of the security forces. It’s totally effective.

Gal Harari, head of the Detectors and Imaging Technology Branch at the Israeli Defense Ministry, says that during testing, we found that soldiers would not be able to be recognized even when viewed with binoculars.

Amazon India Launches Gift a Story Program for Associates Across Its Operations Network, and...

06/11/2020/1:04:am
Bangalore:  This festive season, Amazon India is transforming the act of gifting, with a unique learning concept that leverages storytelling. The company has launched ‘Gift...

16/07/2021/8:45:pm
Jalgaon: A helicopter crashed on Friday evening in the Jalgaon district of Maharashtra, killing one person in the helicopter and injuring another. A police...