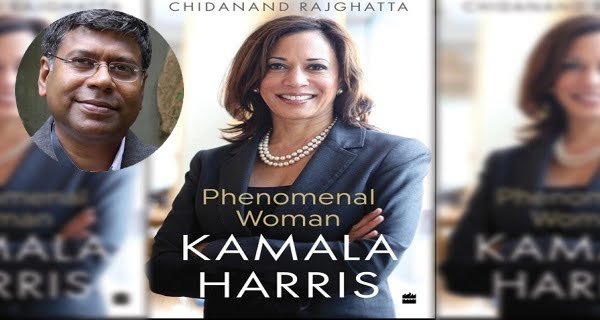 Washington: An Indian journalist and author from Washington attempts to uncover some of her unseen facts in a new book ‘Phenomenal woman’ chronicling Kamala Harris’s ‘unprecedented’ rise to become the first woman vice president and in the process breaking down many taboos.

For example, Harris’ full name is Kamala Devi Harris and how did ‘Devi’ come in the middle of her name because when she was born she had the surname “Iyer” attached to her birth certificate. Writer Chidananda Rajaghatta in his book “Kamala Harris: Phenomenal Woman” reveals similar interesting facts. This book will come to the public at the end of this month.

The authors write that when Kamala was young, Harris’s parents and close friends at the University of California were Lord Meghnad Desai, Amartya Sen, and Ajit Singh, economists and contemporaries of former Prime Minister Manmohan Singh.

Harris (57) was born on 20 October 1964 in Oakland, California. His mother Shyamala Gopalan was from a traditional Tamil Brahmin family. She immigrated from India to the US in 1958 at the age of 19 to study nutrition and endocrinology at the University of California. It was here that he met Harris’ father, Donald Harris, an African-American from British Jamaica.

In a book published by HarperCollins India, Chidanand Rajghatta writes that when Harris was young, Donald studied under a fellowship at the Delhi School of Economics.

The book begins with an introduction to Harris’ mother. The author’s father came to America at about the same time when Shyamala Gopalan came here. Chidanand Rajghatta’s father studied agriculture and dairy science in the state of Kansas. The author said that the story was so interesting that it became a long storytelling Harris’s growing up, his life, and his career.

Rajghatta said, “It’s a biography of sorts, but in a broader sense, it explores the history of the Indo-American community (including me as one of the mixed-race children) and India’s relations with black Americans, including George Washington Carver, Booker Washington, and exchanges between black activists such as Webb Dubois and Mahatma Gandhi. Mahatma Gandhi’s aides Madeleine Slade (Mirabai) and Charlie Andrews delivered lectures at Howard, which influenced generations of civil rights activists prior to Martin Luther King Jr.’

He writes, ‘No matter how we interpret Kamala’s association with the culinary arts, her rise has incorporated some of India’s best-loved foods into the historical-political landscape and oral culture. . Some of these, like idli and dosa and bhindi is cooked in two ways which have been memories of Kamala’s childhood.

The author, Chidanand is a foreign editor, and head of the US Bureau for The Times of India newspaper write in the book, “All evidence suggests that Kamala will be the most influential and powerful leader in American history.”

04/05/2021/10:52:pm
New Delhi: Every day among the patients of the growing corona infection in the country, everyone is working to help in dealing with this...

23/11/2020/11:00:am
Pennsylvania: President Donald Trump has filed an appeal against a federal judge's decision to dismiss his campaign attempt to challenge the election results in...

When can you take Covid booster after the second dose, Bharat Biotech MD told...

10/11/2021/8:44:pm
New Delhi: Krishna Ella, chairman and managing director of Bharat Biotech, says that the appropriate time for the booster dose of the Covid-19 vaccine...