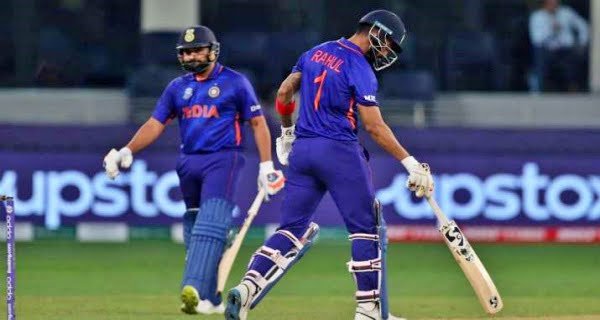 Dubai: In the 37th match of the T20 World Cup, India defeated Scotland by 8 wickets. This is India’s second win in the tournament. Scotland set a target of just 86 runs in front of India (IND vs SCO), which Team India achieved in 6.3 overs by losing two wickets. India won this match in just 39 balls, which is the biggest victory in terms of its balls in T20 history. Opener KL Rahul played an explosive inning of 50 runs in 19 balls with the help of 6 fours and three sixes. Rohit Sharma scored 30 runs in 16 balls with the help of five fours and a six.

Earlier, the Indian bowlers, led by Mohammed Shami and Ravindra Jadeja, performed brilliantly, bowling Scotland out for 85 in 17.4 overs. Indian captain Virat Kohli won the toss and elected to bowl for the first time in the tournament on his 33rd birthday. Fast bowler Jasprit Bumrah did not allow Scotland to get off to a good start by bowling dangerously in the very first spell. Bumrah also surpassed Yuzvendra Chahal (65 wickets) to become the highest wicket-taker for India in this format.

Opener George Munsi (24 off 19 balls) gave Bumrah sixes at square leg and Varun Chakraborty to open his hands for fours. Scottish captain Kyle Coetzer (1) was first bowled by Bumrah and then bowled on a slow ball. Mohammed Shami sent Munsi to the pavilion. Shami and Jadeja took three wickets each for 15 runs. Jadeja dismissed Matthew Cross (2), Richie Berrington (0), and Michael Leask (21 off 12 balls).

Scotland’s score was 44 for four after ten overs. After this, the Indian bowlers did not look back. Callum McLeod scored 16 runs in 28 balls, after which Shami ended his innings. Scotland’s batsmen did not perform well even against more or less weaker teams like Namibia and Afghanistan. For India, Ravichandran Ashwin took one wicket for 29 runs while Varun Chakraborty gave 15 runs but he did not get a wicket.