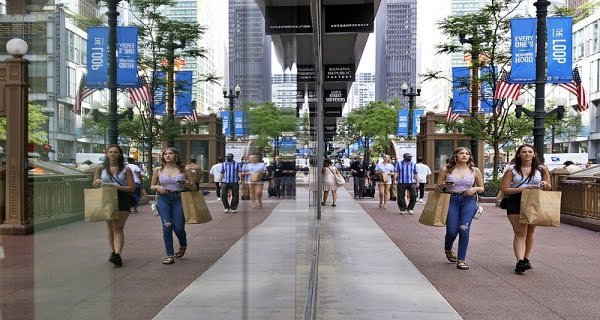 Providence: More states and cities are loosening restrictions in the United States as the number of Coronavirus cases declines and people taking anti-infection vaccine (COVID-19 Vaccination) increases. Massachusetts ended the mandatory wearing of masks on Saturday. A day before this, New Jersey also ended the restrictions imposed due to infection. Authorities in New York and the city of Chicago opened the beaches to the public, although people kept their distance from these places due to strong winds and cold weather. “Welcome Chicago again,” Chicago Mayor Lori Lightfoot said in a video message. The lakefront has now opened. “

Retail stores, restaurants, boating, and cruises have been resumed after being closed for a month in Chicago. The Illinois State Department of Public Health on Saturday confirmed 802 new cases of infection, the second-lowest number in a single day in the past six months. The situation is improving and due to the long weekend, people are expected to make purchases and this will pick up the pace of business. The state of Minnesota on Friday lifted restrictions on bars and restaurants across the state due to infection.

According to data received by the Centers for Disease Control, about 50 percent of the country’s population has received the first dose of the anti-infection vaccine and about 40 percent of the population has undergone complete vaccination. Massachusetts Governor Charlie Baquer abolished the condition of masking on Saturday, but it is still compulsory to cover the face in some places that include public transport. The state of Virginia has also relaxed the rules for social distance and a limited number of people gathering at any location. President Joe Biden arrived at the Rock Climbing Gym in Northern Virginia amid conditions improving in the country.

02/07/2020/9:23:pm
New Delhi: Union Tourism Minister (IC) Prahlad Singh Patel on Thursday said that all the monuments can be opened from July 6. Taking to micro-blogging...

29/12/2020/9:21:pm
Zagreb (Croatia): The strong tremor of the Earthquake was felt on Tuesday in Croatia. Some people were injured and several houses were damaged in...

13/02/2021/10:52:am
Mumbai: The rising outbreak of Coronavirus has not completely ended. Due to this, health experts and doctors are advising to wear face masks to...