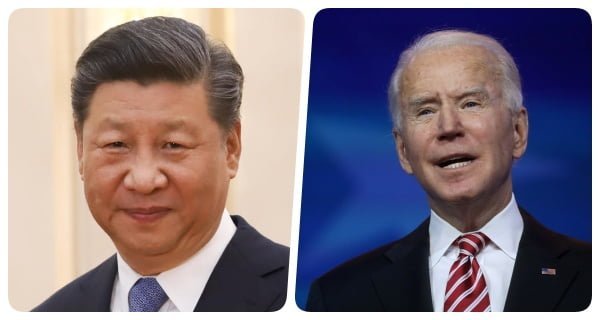 BEIJING: Seeing relief after US President Joe Biden was sworn in (Oath Ceremony) on Thursday, China (China) expressed its closeness to the new US president on Thursday. Donald Trump’s tenure severely worsens bilateral relations and is brought back on track.

Trump called it a Chinese puppet for the WHO’s handling of the Covid-19. Chunying said, “We congratulate President Biden on his swearing in. I noticed that many media institutions in America said that after going through an extraordinary period, this is the new day in America, we believe that the people of our two are entitled to embrace a better future. We hope Biden will succeed in governance. “

Chunying said, “I noticed that his first speech mentioned global unity many times. This is essential in our bilateral relations. ” He said that in the last four years a handful of American politicians have lied so much and increased hatred and division’. The spokesman said, “Chinese and American people have fallen prey to it.” He asked the new US administration to bring back the deteriorating relations between China and America.

Chunying said, “We have different social systems, stages of development, and historical culture.” It is natural for us to have differences. Biden also said that democracy should have the right to disagree and dissent. ” With the conclusion of the Trump administration on Wednesday, China breathed a sigh of relief and hoped that the snow would now melt after the tensest time in the Beijing-Washington relationship. Here the state media said that Biden in his first speech had mainly emphasized bringing unity in the country and unlike Trump, he did not name China even once.

However, he did not give any indication to correct the deteriorating relationship. Trump had aggressively pressurized all aspects of US-China relations during his tenure. Just minutes after Joe Biden was sworn in as the new US President, China took former US Secretary of State Mike Pompeo and 27 others associated with the former Trump administration to take steps that would “seriously harm” his interests. Enforced sanctions against. China’s foreign ministry announced these restrictions late Wednesday night.

These restrictions were announced immediately after Biden’s swearing-in ceremony. During Donald Trump’s predecessor administration in the US, relations between China and the United States had become highly strained, including human rights, the global outbreak of the Corona virus, and a number of cases, including China’s aggressive military moves into the disputed South China Sea. China specifically targeted Pompio.

It is noteworthy that Pompeo had imposed a new ban on China, declaring that Beijing’s policies on Muslims and ethnic minorities in western Xinjiang province were similar to “genocide”. Hua said of these allegations, “Pompeo has lied countless malicious lies over the past several years and the case you mentioned is one of those fabrications. Pompeo’s so-called resolution for us is no more than a useless piece of paper. “

China furious over diplomatic boycott of Olympics, said – Boycott countries will pay the...

Anupa Das became the third millionaire, will this contestant win 7...

Pakistanis will not be able to visit China, due to Corona,...

Lack of food and drink in Britain, know how the condition...