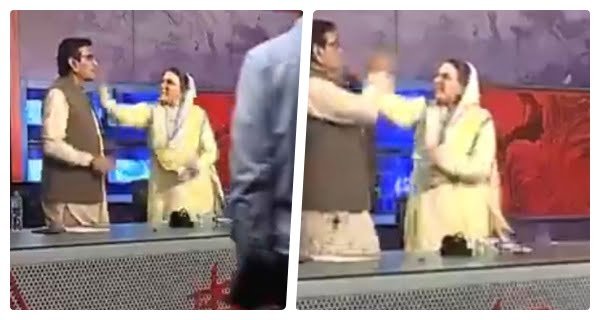 Islamabad: Firdous Ashiq Awan, leader of Pakistan Tehreek-e-Insaf, the ruling party of Prime Minister Imran Khan, slapped a Pakistani MP during a live TV show. Not only this, but Firdaus also abused him. The victim MP is being told as Qadir Mandokhel of the victim MP Bilawal Bhutto’s party Pakistan Peoples Party.

Firdaus’s actions have been caught on camera and its video has gone viral on social media. People are also sharing this video fast. It can be seen in the video that during the Firdaus show, suddenly the PPP got angry on the MP and grabbed the leader’s collar. After that he slapped them. Firdous did not stop there, he also abused the PPP leaders. Seeing the matter gaining momentum, the crew members had to come and both the leaders had to be separated from there. It is being told that this incident happened during the recording of a show on Express TV by journalist Javed Chaudhary.

Firdous further said, the full video of this incident should be released so that people can know that I was forced to do this. My political reputation and prestige were at stake during the show. I am talking to my lawyers in this whole matter.

18/02/2021/8:55:pm
Canberra: Facebook on Thursday prohibited the sharing of news in Australia, showing a strong attitude. This move by the social media company has led...