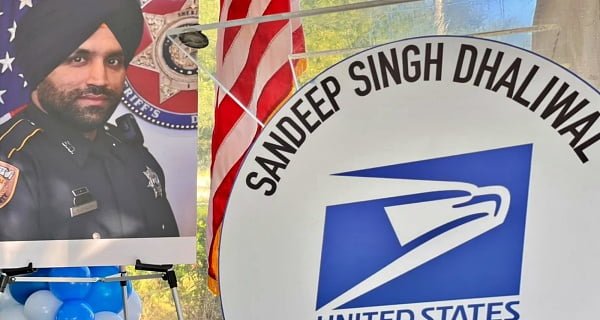 Houston (USA): A post office in West Houston has been renamed after Indian-American Sikh police officer Sandeep Singh Dhaliwal, who was shot dead in 2019. Dhaliwal (42) was shot on 27 September 2019 while he was on duty. He came into the limelight in 2015, when he was to become the first Sikh police officer in Texas to be given the right to wear a turban and have a beard.

A ceremony was held in her memory on Tuesday, where Lizzie Fletcher, the woman lawmaker who moved the name change motion in the US House of Representatives, said that the post office at 315 Addix Howell Road should be named after her, as he had laid down his life for the service of the community.

Fletcher said, “I am honored to have played a part in commemorating the remarkable life of Dhaliwal of selfless service. The best represented our community, they worked for equality, relationships, and community through service to others. I am delighted to work with a bipartisan delegation, our community partners, and members of the Sikh community to pass a bill to rename this building as ‘Deputy Sandeep Singh Dhaliwal Post Office’.”

Tight restrictions in states amid fear of the third wave, will there be lockdown?

04/01/2022/10:35:pm
New Delhi: Coronavirus Cases in India are increasing continuously in the country. In view of the rapidly increasing cases, experts believe that the third...

29/07/2020/1:00:pm
Aligarh: During the quarantine stay in the hotel in Aligarh district of Uttar Pradesh, the matter of eating food worth 50 lakhs by doctors...