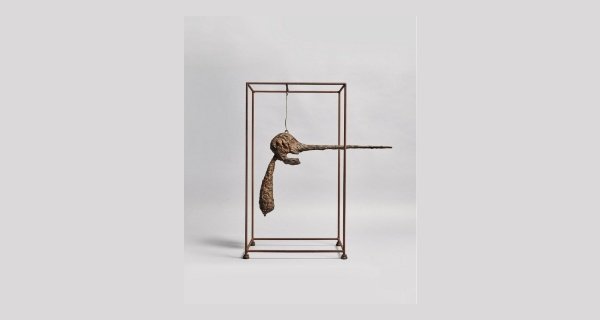 Justin Sun, the founder of TRON, CEO of BitTorrent, has successfully bid on “Le Nez” by Alberto Giacometti for a purchase price of $78.4 million at the Sotheby‘s New York Autumn Auction!

Nothing gets more eyeballs in today’s crypto world than the metaverse and NFT. The former has drawn a swarm of companies large and small including Meta (parent company of Facebook), Microsoft, Disney, Nvidia, and BATJ to place their bets, but most of them hastily jumped on the bandwagon without noticing the lack of actual use cases in this field, a crux that urgently needs to be solved.

Quite the contrary, the highly promising NFT space, which is a hub for quality artworks and a natural fit for blockchain-based art, has given rise to a stream of premium use cases and is seeing incredible momentum. According to available sources, on November 15, the total market cap of NFTs hit a new high of $55 billion.

Among the crowd of top-class art collectors, Justin Sun and his TRON are a prominent force. On November 16, Justin revealed in his Weibo post that he has won the bid for The Nose (Le Nez), an iconic work by the venerated Swiss surrealist artist Alberto Giacometti, for upwards of $78 million at Sotheby’s New York Fall Auction. His persistent efforts to purchase top artworks have brought him under the global spotlight. It may to others appear to be nothing more than purely astronomical figures, but to Justin himself, with all the wealth and fame he has accrued, it clearly means much more.

The piece that Justin Sun clinched this time is not to be taken lightly. Featured on the cover of the catalog at Sotheby’s sale of The Macklowe Collection in New York, The Nose (Le Nez) is one of Giacometti’s most important and influential sculptures. The other works in this series have all been collected by renowned museums around the world, including the Centre Pompidou, the Fondation Alberto et Annette Giacometti, Kunstmuseum Basel, etc. In 2018, Solomon R. Guggenheim Museum curated a Giacometti retrospective, where The Nose was featured on the cover of the catalog, amply attesting to the pivotal role of this sculpture in both Giacometti’s artistic career and art history.

Followers of Justin Sun and TRON all know that this fervent art collector has been investing heavily in converting top artworks into NFTs all along. His acquisition of the masterpiece marks another great feat of TRON in the field of crypto art.

Born in 1990, Justin Sun just turned 30 last year, but has already made himself a billionaire with a glittering career. With all the luxury to stay behind the scenes and live life to the full, he remained at the forefront of the crypto space and kept ploughing ahead. “I got to know Bitcoin in 2012 when I was only 22, and I got into the industry by accident. I’ve come to realize early that blockchain will be my lifelong career.” Justin once put it.

And he kept to his word. From DApps, stablecoins, distributed storage, NFT, and then the metaverse, he has led TRON to grow into one of the world’s top three public chains and is one of the trailblazers to witness how blockchain has evolved to what it is today.

As an early mover in the NFT space, Justin Sun has joined the bidding for many top-class artworks.

Following this, Justin Sun has amassed many top-notch artworks and donated some of them to APENFT Foundation for innovation in arts. Earlier in April, Justin purchased Computer in Society – April. 2, 1965, an NFT cover of TIME magazine, at a hammer price of 117 ETH ($209,736). Later in June, he won the auction for the Golden Whale Pass, an NFT based on the Liquid sidechain, which granted him lifetime access to future Bitcoin Conference events. The 12.6 BTC he paid for this NFT makes it the most expensive Bitcoin NFT ever sold.

It is also worth noting that Justin Sun secured one of the “Package Painting” series created by KAWS in 2001 named “UNTITLED (KIMPSONS)” with HK$2.5 million at Sotheby’s first “CONTEMPORARY CURATED: ASIA” art auction guest-curated by Jay Chow.

On October 3, Justin tweeted about his recent acquisition of three Digital Zones editions, a series of NFT artworks created by artist Mitchell F. Chan, for 569 ETH (or $1.71 million) and his decision to donate them to APENFT Foundation.

As an insightful industry leader, Justin Sun has built a wide footprint in the NFT space from early on and translated his insights on NFT into concrete moves.

“I started to think about venturing into the NFT sphere last year. My estimate is that 50% of the world’s top 100 artists and artworks will be recorded as NFTs in the following decade. Blockchain technology builds a bridge between traditional art and cutting-edge technology, presenting a once-in-a-lifetime opportunity to both the blockchain and the art industry.”

Statistics from CoinGecko on November 16 show that the total market cap of NFT tokens has amounted to $49.5 billion and the 24-hour trading volume recorded $7.1 billion. It’s not hard to tell that NFT has already become an area of strategic importance for the blockchain industry.

Lord Shiva entrusts operation of Universe to Shri Hari Vishnu on this day,...

17/11/2021/9:52:am
New Delhi: The holy festival of 'Vaikunth Chaturdashi' is celebrated on the Chaturdashi of Shukla Paksha of Kartik month. Today i.e. on Wednesday, November...

Watch the grand celebration of Shri Krishna Janmashtami from Mathura and Dwarka sitting at...

Chinese scientists claim to have found 24 types of ‘coronavirus’, said – four are...

12/06/2021/9:09:pm
Washington: Where did coronavirus come from? To find out, the demand for investigation has started rising once again. Meanwhile, Chinese researchers have claimed to...

Soul Is All That Matters: The All-New BMW R 18 Debuts in India