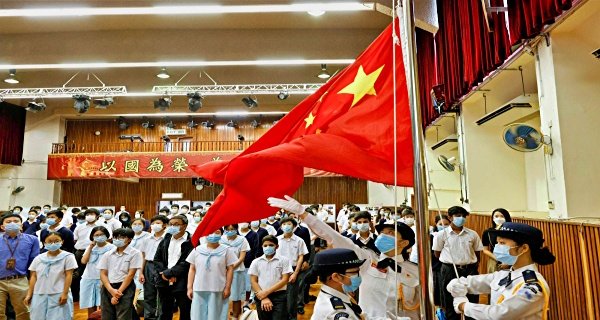 Hong Kong: Under the new law in Hong Kong, now the Chinese flag will be hoisted in private schools. Also, children will have to sing the Chinese national anthem. Experts have called this law dangerous. He has said that with this an attempt is being made to increase the feeling of attachment towards China in the children. The Voice of America (VOA) of America, quoting a government statement, said that the purpose of this new policy is to promote national education and develop national spirit among students. The statement said that through the rules related to the national anthem, the student’s attachment to the Chinese people and the national spirit will be increased.

Beginning next year in Hong Kong, all private kindergartens, primary and secondary schools will have to display the national flag every school day and hold a flag-hoisting ceremony along with singing the national anthem once a week. This mandate was announced after the enactment of the National Anthem Ordinance in June this year. Under this new rule, any activity to ‘insult’ the national anthem or flag will be considered an offense, and the person doing so will be punished. Through this, the government’s effort is to suppress the voice of those who oppose China’s atrocities and strengthen their grip.

Curie said, ‘It is very similar to what happened in Eastern Europe after the Second World War. Then the youth of the countries which the Soviet Union had occupied, started making them communist. It is a form of a soft sermon, which begins with things like asking children to adopt the flag and the national anthem. After this Marxism, Leninism, Maoism will be included in the syllabus.

The meeting of the government and farmers ends agreed on two of the four...

30/12/2020/8:12:pm
New Delhi: The seventh round of negotiations between the farmers and the government regarding agricultural laws came to an end. The meeting seems to...

Dealing with China, India deployed skilled soldiers to fight in the mountains, speed up...

22/06/2020/8:20:pm
New Delhi: After China's deception in the Galvan Valley of Ladakh, India is leaving no stone unturned to surround it. Amidst the ongoing tension...

Oxygen Concentrators: What We Need to Know

330,000 children sexually assaulted in the last 70 years in the Catholic Church of...