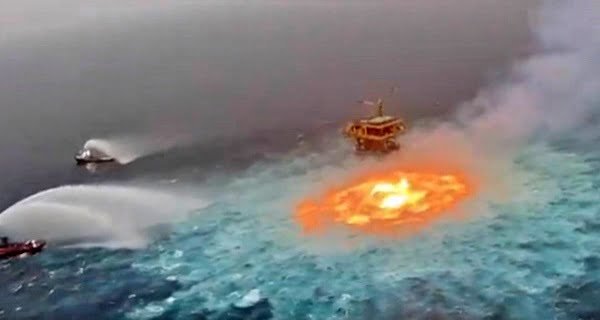 Mexico: Have you ever heard that there is a fire in the sea? Yes, you will definitely find this question strange, but the video of one such incident is becoming increasingly viral on social media (Mexico Sea Viral Video). This video is of a gulf near Mexico. Everyone is shocked to see this video. Because the flames in the sea seen in this video are very shocking. Because of its round shape, people have named it ‘Eye of Fire’.

The incident occurred in a maritime zone off the west coast of Mexico’s Yucatan Peninsula. It is being told that the incident took place due to a gas leak in the underwater pipeline. However, the fire was extinguished on Friday morning. According to Mexican oil company Pemex, the sea fire was brought under control after five hours.

According to Pemex, no casualties have been reported in the incident. This video was shared by Liam young on the social media platform Twitter. This video has been liked more than a thousand times so far. Their people are also commenting on seeing this. This video has also been retweeted several times on the surface itself.

In research claim, 14% of patients recovering from corona are getting new disease

27/05/2021/10:11:am
London: Even though a patient has been cured by Coronavirus infection spread worldwide last year from China, but there is a risk of many...

Air India aircraft broken into two pieces by slipping on runway in Kozhikode, 3...

07/08/2020/10:10:pm
New Delhi: Kozhikode airport plane crashed on Friday in Kozhikode, Kerala. While landing at Karipur Airport in Kozhikode, the plane slipped on the runway...