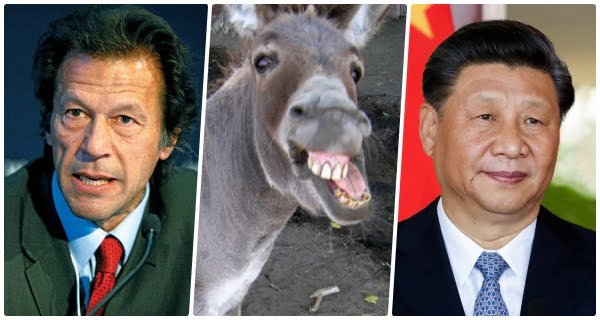 Islamabad: Pakistan’s opposition has named Prime Minister Imran Khan as Dunki Raja. The Parliament there resonated with the new slogan on the day of the Quami budget. Dunki Raja’s government will not work, will not work.

How is the Pakistani economy related to donkeys?
The number of donkeys in Pakistan has increased a lot. Their number increased to more than 56 lakhs with an increase of about one lakh in a year. Imran government is earning a lot of foreign exchange by exporting donkeys to China. Pakistan does not have much exportable goods to China, but donkey exports have become a good source.

Why does China need so many donkeys?
It is a matter of pride to have donkeys in China. Traditionally there medicine is made from donkeys there. The Chinese believe that gelatin obtained from the skin of a donkey has medicinal properties, strengthens the blood and increases immunity.

Economics of china
Izhao is the most famous variety of gelatin with medicinal properties in China. It is mostly produced in China’s eastern province of Shandong. The sale of this gelatin in local markets is 130 yuan (Rs 1500) per kg. Millions of donkeys are slaughtered every year to produce izhou in China. In the year 2017, so many donkeys were killed that their numbers suddenly decreased in China. Then China resorted to Pakistan with the third largest population of donkeys.

Sino-Pak Agreement
Pakistan has promised to export 80,000 donkeys from China in the first three years. Chinese companies agreed by investing $3 billion (Rs 225 billion) for donkey farming. Pakistan’s economy and donkey exports have become a joke. Donkey breeders are happy because of getting a good price.

22/04/2021/8:57:pm
Washington: The US parliament has confirmed the name of Indian-American Vanita Gupta for the post of Associate Attorney General, after which she became the...

Aircraft missing in Indonesia with 62 passengers

09/01/2021/10:12:pm
Jakarta: On Saturday, the Jet Passenger Plane lost contact with the Air Traffic Control after flying from Indonesia's capital Jakarta (Jakarta). There were 62...

Facebook’s big decision after the coup in Myanmar, all accounts related to army closed

25/02/2021/2:11:pm
Naypyidaw: The social media company Facebook said on Thursday that it is prohibiting all accounts linked to the army and advertisements of companies in...

Dr. Kiran Bedi removed from the post of Lt. Governor of Puducherry

16/02/2021/9:49:pm
Puducherry: Dr. Kiran Bedi has been removed from the post of Lt. Governor of Puducherry. Dr. Tamilisai Saundarajan, Governor of Telangana has been given...