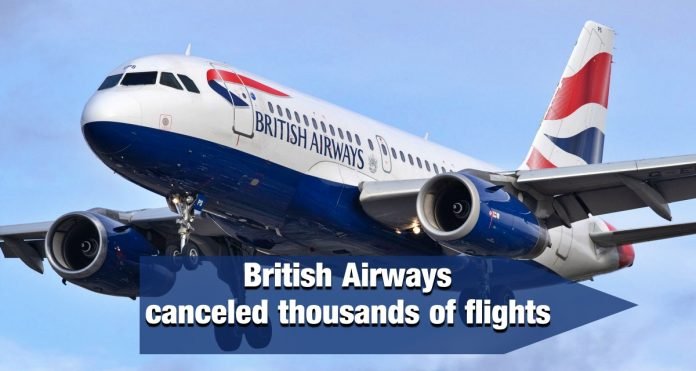 London: The new variant of Coronavirus, Omicron Variant, is spreading in the world. Because of this, most countries have imposed travel bans. Meanwhile, Britain has also tightened the rules of Corona. British Airways on Tuesday canceled at least 2000 flights for March 2022. In view of the decrease in the demand for air travel due to the Corona epidemic, there has been a reduction in international flights.

Aviation website Simple Flying cited Cerium figures in its report to say that British Airways has cut 2,144 flights from its winter schedule. More than half of these were planned for January. The airline has cut 210 flights in December, 1,146 in January, 210 in February and 243 in March.

The decision has affected domestic routes such as London to Belfast and intercontinental flights from London to Cape Town. Affected passengers will be entitled to a full return and optional flights.

However, a spokesperson for British Airways said, ‘Of course a new variant of Corona is spreading, but the reduction in winter schedule has nothing to do with it. Airways has managed its schedule due to low demand for flights.

At the same time, British Airways will become the first airline in the UK to use sustainable aviation fuel produced on a commercial scale after signing a multi-year agreement with Philips 66 Ltd. British Airways said in a statement that, “Thousands of tons of sustainable aviation fuel (SAF) will be produced in the UK for the first time at the Phillips 66 Humber refinery near Immingham and British Airways will be expected to start its operations by early 2022.” Many flights will be supplied.”

11/07/2021/9:55:am
NASA: Alien life is possibly the widest, and yet the most uncertain research project ever taken up by mankind. While numerous probes and space...

Server failure, 17 lakh consumers did not get electricity bill

China will give five million doses of corona vaccine to Pakistan

09/12/2021/8:42:pm
London: British Prime Minister Boris Johnson's wife Carrie Johnson has given birth to a daughter. Johnson's office said the baby was healthy and the...

This mobile game made people crazy, leaving behind legendary games like...