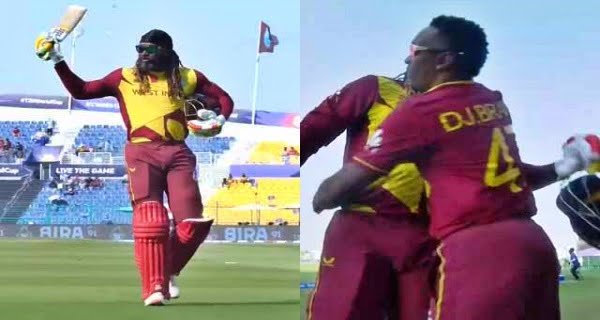 New Delhi: Where the journey of West Indies in T20 World Cup 2021 is over now. At the same time, in this last match, he also had to face a crushing defeat by 8 wickets at the hands of Australia. Be aware that this was the last match of Dwayne Bravo from West Indies. He has already announced his retirement. But seeing the way Caribbean explosive batsman Chris Gayle came out of the field yesterday after losing the match, he felt that now he has probably played his last international match in T20 format.

Yes, in fact, when Gayle got out after scoring 15 runs while going to the pavilion, he raised the bat and greeted the audience. On reaching the dressing room, the teammates stood up and after clapping, they also welcomed them with a hug. He also gave his cricketing essentials to the fans.

Not only this, after the match, the Australian team also gave its guard of honor to Bravo and Gayle. Commentator Ian Bishop said during the match that, all this only indicates that we are seeing Gayle in the West Indies jersey for the last time. Not only this, former Pakistan captain Shahid Afridi also congratulated Gayle for his illustrious career, in response to which Gayle also thanked him.

Afridi tweeted, “One of the greatest T20 players of all time. Congratulations to you on a wonderful career Gayle. You inspired a new generation of players around the world.”

Gayle wants to play his last match in Jamaica
In this regard, Gayle also revealed why he did not announce his retirement. He admitted that he could not give his best in this tournament. He could only score 45 runs in 5 matches and he was also disappointed with the West Indies campaign. Which recorded only one win in 5 matches.

Talking to ICC on this, he said, “I was trying to enjoy my last match. It was a very disappointing World Cup for us and for me. It’s sad that it came at the end of my career. A lot is yet to happen in West Indies cricket. Very good talent is coming out. I can play a supporting role with him and wish West Indies cricket all the best.” Gayle said that I have not announced my retirement now, but if they give me a chance to play a match at my home ground in Jamaica, I can say thank you. I can’t say this in the least right now.”

When Remedisvir is necessary, how much the oxygen level falls?

Progress in Iran-US nuclear talks, the representative said – the results are far away

17/07/2020/7:19:pm
Jaipur: In the midst of the ongoing political crisis in Rajasthan, an audio has gone viral about the downfall of the Gehlot government. In...

06/03/2021/10:40:pm
Washington: A NASA rover that recently landed on the surface of Mars traveled 21 feet in its first experimental campaign on the red planet...

07/09/2020/11:21:pm
Mumbai: Mumbai based Creative fitness facility Q Cage Fit has been encouraging young personalities and revolutionizing the fitness set-up for all with their innovative...