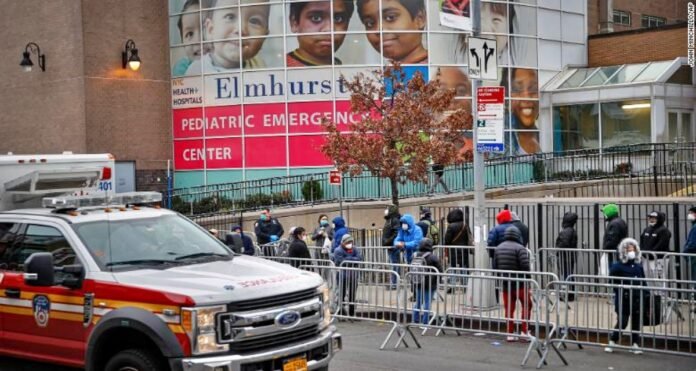 New Delhi: America was still battling with the Delta Variant that in the meantime, the wave of Omicron has taken a formidable form with the rate of infection. According to the report, the rate of admission of people in America’s hospitals has also crossed the peak of last winter. According to data received from the US Department of Health and Human Service, 1,42,388 people were hospitalized due to virus infection across the country, this figure has also crossed the figure of January 14 last year. The hospitalization rate has increased to 83 percent in the last two weeks. Due to the flood of patients in hospitals from Omicron, the already exhausted hospital staff has become deeply depressed. Doctors, nurses, and other health workers are not getting seriously ill since they have been vaccinated, but they are unable to treat other patients due to being infected. In such a situation, problems are also being faced in the treatment of patients suffering from other diseases.

What do the figures say?
Experts believe that the delta variant may be behind the deaths related to Kovid-19, there has been a 33 percent increase in hospitalizations and a 40 percent increase in deaths in the last week. At the same time, Rochelle Valensky, director of the Center for Disease Control, says that the fast-spreading Omicron variant is likely to peak in the coming weeks. 90 percent of the cases that are coming out across the country are related to the Omicron variant. However, experts believe that Omicron is less lethal than the previous variant. In such a situation, it can be guessed about the recent deaths that the reason behind it could be the delta variant.

Even though there are no deaths, more infections are also fatal
Looking at South Africa as a base, it is understandable that in the case of Omicron, the faster the infection increased, the faster the rate of its decline. But the case of more people getting infected is worrying because it threatens the lives of such people, who are already suffering from some disease or whose immunity is weak. In such a situation, security is the biggest defense.

Increasing pressure on hospitals
It is believed that people from Omicron are not getting seriously ill and they are not going to go to the hospital. But it is too early to say anything after the speed with which the figures are increasing, and on the one hand, America which is already surprised because of Delta and the hospitals here are dealing with Delta variant only, in such a situation, Omicron’s cases will increase. With this, there can be more congestion in hospitals, emergency centers, across the country, which can upset the already exhausted doctors and staff badly.

Soldiers could not bear the cold of Tibet, China has started deploying a robot...

30/12/2021/10:17:pm
Beijing: In this severe winter season, Chinese soldiers are unable to deploy near the Indian border in Tibet and Ladakh. It is proving to...

11/08/2020/9:52:pm
The recent sale of Flipkart and Amazon (Flipkart) has seen strong sales of Chinese smartphones and other electronics brands. After the India-China border dispute,...

09/04/2021/10:21:am
Yangon: In Myanmar's military regime, restrictions on information increased further on Thursday, and Broadband Services are not available on many networks. In some areas,...

02/09/2021/2:41:pm
Kabul: In Afghanistan, except for only one province, Panjshir Valley, the whole country is now under the control of the Taliban. There is a...