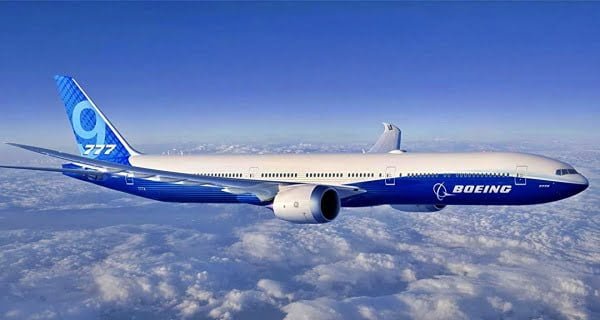 Chicago (US): Aircraft manufacturer Boeing has recommended all airlines to stop the flight of its 777 models (Plane). The company took this step last weekend in Denver after the aircraft engine of this model failed and the US regulator instructed United Airlines to inspect those aircraft. United Airlines said on Sunday that it was temporarily removing aircraft of this model from service. He made this announcement following an emergency landing at Denver International Airport following a right engine burst immediately after takeoff.

It is worth mentioning that the Pratt & Whitney PW4000 engine mounted on the aircraft fell into the suburbs after being torn to pieces. However, the aircraft was safely taken off, carrying 231 passengers and 10 crew members. US Federal Aviation Administration (FAA) Administrator Steve Dickson said in a statement issued to Raviar that, based on a review of initial safety data, inspectors have reached the opinion that increasing the frequency of inspecting wing blades in aircraft of this model The requirement is used only in Boeing 777 aircraft. The statement said that it probably meant that some aircraft needed to be erected.

Boeing said they would have to do so until the FAA established an inspection process. According to financial newspaper Nikkei, Japan has also ordered the flight of aircraft of this model. According to Japan, the same category of engine had a problem in December last year.

Boeing said in a statement that there are 69 aircraft of 777 models that have Pratt & Whitney-4000 engines and 112 engines are in service while 59 engines of this model are in the warehouse. According to the FAA, 25 aircraft of this model are in service in the United States, while 32 such aircraft were operating in two Japan-based airlines. Boeing said in a statement released on Sunday, “We are working with the regulator and the aircraft will not fly until they take action and engines of this category will be further investigated.” The engine manufacturer said it is sending teams to work with investigators.

Due to the massive shock of the coronavirus pandemic,Global economy to shrink 5.2% this...

10/06/2020
Washington: The global economy, which has plunged into a severe contraction, will shrink by 5.2 percent this year due to the massive shock of...

15/08/2020
Bhopal: Shivraj Government has found a formula to appease angry MLAs and MPs. An important decision was approved in the cabinet meeting held on...

Economy threatened due to low birth of children in China, now the law will...

19/02/2021
Beijing: More than four years after China ended its controversial one-child policy, China is considering additional measures to increase the birth rate in the...

17/06/2020
Indore(MP): In protest against the killing of 20 Indian soldiers in a violent clash with Chinese soldiers in the Galvan Valley of Ladakh, transporters...