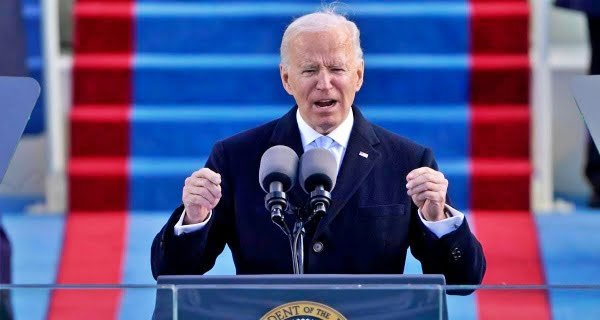 Washington: After a lot of political upheaval, finally a new government has been formed in America. Democrat Joe Biden was sworn in as America’s 46th president on Wednesday. US Supreme Court Chief Justice John Roberts administered the oath of office to Joe Biden as the country’s 46th president. Also, the first American woman of Indian origin Kamala Harris was also sworn in as the Vice President. While sitting in the chair of power, Biden did what the whole world expected. Upon finding the President’s chair, Joe Biden took many such important decisions and overturned the orders of former President Donald Trump. (Photo 100 News 18 English)

On the very first day, US President Joe Biden signed several decisions, mainly the Paris Climate Agreement. The White House has informed that America will return again to the Paris Agreement on Climate Change. Biden announced to rejoin the Paris Climate Agreement. He made this promise to the people of the country during elections. Not only this, Joe Biden signed a decision to control an epidemic intended to intensify the war against the coronavirus. According to this order, he has made masks and social distancing mandatory. In addition, Joe Biden overturned Donald Trump’s decision to end the Muslim travel ban in America. Under this, Trump had banned travel of some Muslim countries and African countries to America. Not only this, but Biden also overturned Trump’s decision to build a wall on the Mexico border and stopped funding for it. Mexico has praised Joe Biden after this decision. (Photo 100 News 18 English)

Not only this, US President Joe Biden has signed an order to stop the expansion of the Keystone XL pipeline soon after becoming President. Keystone is an oil pipeline that carries crude oil from the Canadian province of Alberta to the US states of Illinois, Oklahoma and Texas. Biden spoke out against the Keystone XL pipeline and said that we do not need tar sands. A key promise of Biden’s presidential campaign was the commitment to cancel the Keystone XL project. It was believed that Biden could pull off several projects launched by the former government. For example, the US encourages fracking and oil-gas production in Argentina through international development financing, which occurred for the last time for the Waka Muerta projects. Several US senators, including elected Vice President Kamala Harris, had signed a petition against it. (Photo 100 News 18 English)

Biden had said that he would hold Brazilian President Bolsonaro accountable for deforestation. Perhaps this can be achieved by rallying with other countries and supporting $ 20 billion (about 1500 billion rupees) for the protection of Amazon. However, local Brazilian groups insist that this should be done in a way that acknowledges and respects the sovereignty of Brazil on its part of the Amazon.

28/02/2021
Mumbai: Bollywood actor Amitabh Bachchan has indicated that he needs to undergo an operation due to a health problem. It is not yet clear...

28/08/2020
New Delhi: In the midst of the corona transition, the business world has slowly started to fester. Now Vistara has started its nonstop flight...

03/08/2020
New Delhi: Domestic Gas Subsidy is not going to be received on domestic gas in this month i.e. August. But have you noticed that...