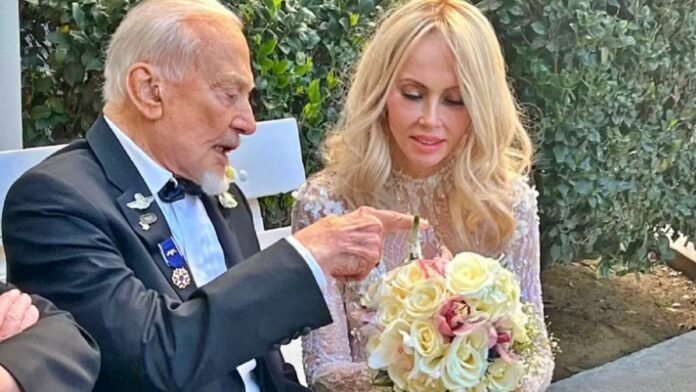 Washington: Former astronaut Edwin “Buzz” Aldrin, who became the second man after crewmate Neil Armstrong in 1969 to set foot on the Moon, celebrated his 93rd birthday on Friday with his “longtime girlfriend”. Married to. Edwin announced his marriage on Twitter. Aldrin wrote, “On my 93rd birthday and the day I will also be honored by Living Legends of Aviation, I am pleased to announce that my longtime love Dr. Anca Faur and I are Now tied in the bond of marriage. We were engaged in a small private wedding ceremony in Los Angeles.

Aldrin posted two pictures of himself in a tuxedo. Aldrin thanked fans for their birthday wishes in another tweet on Friday. “It means a lot and I hope to continue my service for many more revolutions around the Sun,” he said. In July 1969, Mission Commander Armstrong, Lunar Module Pilot Buzz Aldrin, and Command Module Pilot Michael Collins flew Apollo 11 on a journey of nearly 2.5 million miles to the Moon. It took them four days to reach their destination.

Armstrong stayed on the lunar surface for 2 hours 32 minutes and Aldrin, who followed him, spent about 15 minutes less. The two astronauts set up an American flag before returning to the spacecraft, conducting scientific experiments on moon rocks. He also spoke to President Richard Nixon via radio from the Oval Office.

Maxwell’s wedding card went viral, know when and where he will marry Vini Raman

27/09/2020/5:34:pm
The operation was launched in the Maiwand district of the province and left 28 insurgents dead and 30 others injured, the spokesman, Jamal Nasir Barakzai, said.

27/03/2021/9:13:pm
London: In another 'Kill the Bill' anti-lockdown protests in the southwestern city of Bristol, England, hundreds of protesters lay eggs on British police officers...

20/08/2021/10:06:am
Washington: The Pentagon said Thursday that a total of 7,000 people have been evacuated from Afghanistan since the evacuation operation began on August 14,...