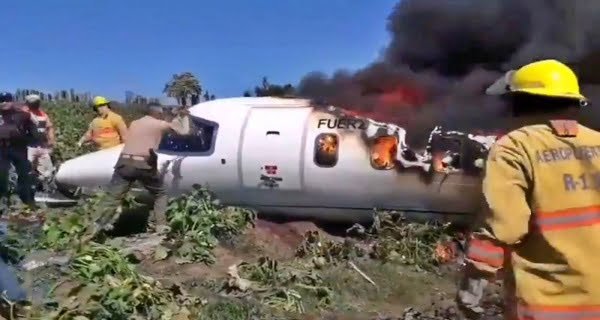 Mexico City: Six military personnel have been killed in an Air Force Plane crash in the state of Veracruz, Mexico.

The Mexican defense minister said in a statement on Sunday that the crash happened Sunday morning as the Air Force’s Learjet 45 was taking off from Jalpaiguri airport. The statement did not say what caused the crash or how many people were on board. It was informed that six army personnel were killed in the accident and the matter is under investigation. Local media reported that the plane took off and caught fire.

08/02/2021
Washington: America's Finance Minister Janet Yellen has said that the country is still in a "deep abyss" due to the unemployment of millions of...

Why not a black woman? Joe Biden hopes for the post of Vice President

20/06/2020
Washington: Demand from Joe Biden to nominate a black woman for the post of Vice President is growing in the wake of demonstrations against...

15/11/2020
Bucharest: A fire broke out in the ICU ward of a hospital in Romania, where people infected with the coronavirus were being treated. Ten...

16/09/2020
United Nations: The historic 75th session of the United Nations General Assembly began amid the outbreak of the Corona Virus epidemic. For the first...

19/07/2020
Bhopal: The Madhya Pradesh government has transferred the state transport commissioner V Madhu Kumar. The order of his transfer came after 1991 Indian Police...