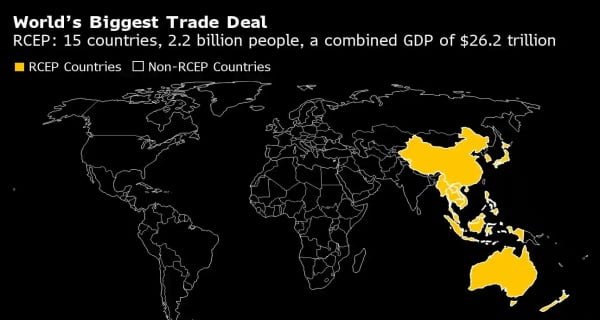 Hanoi (Vietnam): China and 14 other countries have agreed to form the world’s largest trade bloc (Tade agreement), which will cover about one-third of economic activities. Many countries in Asia hope that the agreement will help them recover faster from the Coronavirus epidemic. The Regional Comprehensive Economic Partnership (RCEP) will be signed digitally on Sunday outside the annual summit of the 10-nation Association of Southeast Asian Nations (ASEAN).

“After eight years of hard work, the moment has finally come when we will sign the RCEP agreement,” said Mohammad Azmin Ali, Malaysia’s Minister for International Trade and Industry. He said the agreement signaled that the RCEP countries had decided to “open up their markets instead of taking protectionist steps in these difficult times”. In addition to the 10 ASEAN countries, the agreement includes China, Japan, South Korea, Australia and New Zealand. Officials said the door has been left open for India to rejoin the agreement. India had pulled out of the deal due to domestic opposition to the obligation to open its market under the agreement. Japanese Prime Minister Yoshihide Suga said his government supports the expansion of the free and fair economic zone in the agreement, including the possibility of India’s return in the future, and expects support from other countries.