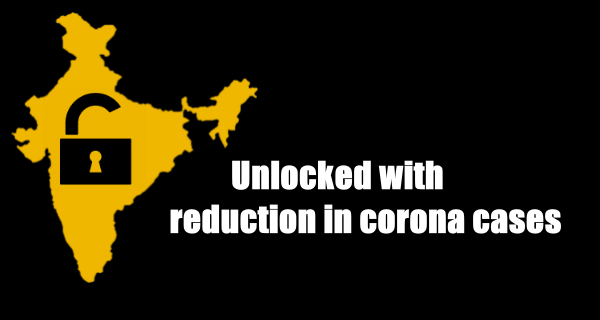 New Delhi: With the weakening of corona second wave, unlock procedure is started in the country. Most of the states has started partials or full unlock.

Delhi
Market malls open with the odd-even arrangement in Delhi – After being closed for more than one and a half months in view of the second dreadful wave of the Covid-19 epidemic, markets and malls opened on the basis of odd-even arrangement in the national capital on Monday. Attendance was very less. Only a few customers were seen in many markets, while shopkeepers were seen cleaning and sanitizing their shops. The sellers are hopeful that more people will come in the coming week when things get better.

Haryana
The Haryana government on Sunday extended the lockdown implemented to prevent the spread of Covid-19 for a further week till June 14. However, further relaxation in restrictions has also been provided. Exemptions have been given to open shops and shopping malls in the state. Religious places can also now open with 21 people at a time. Corporate offices have also been allowed to open with 50 percent of personnel following social distancing norms. Now 21 people can attend any wedding and funeral.

Sikkim
The Sikkim government on Sunday announced to extend the lockdown implemented in the state by one week till June 14. However, the state government has also given some relaxation in the restrictions, under which ration and vegetable and hardware shops will now be able to open from 7 am to 2 pm. Earlier, shops were allowed to open only till 12 noon.

Telangana
Lockdown extended in Telangana till June 19- The Telangana government extended the lockdown imposed for the prevention of Covid-19 for the next 10 days on Tuesday with relaxation from 6 am to 6 pm daily. Now this lockdown will last till June 19. According to a government release, in the border areas like Khammam, Nalgonda and Nagarjuna Sagar, there will be relaxation till 2 am in view of daily cases of Covid.

Puducherry
Puducherry government extended the lockdown till 14 June, some relaxation in restrictions – The Puducherry government has extended the existing lockdown for another week from 7 June midnight to 14 June but at the same time announced the relaxation of many restrictions. This announcement has been made after the decrease in the cases of corona virus in the union territory. In an order issued late Monday night by the Secretary (Relief and Rehabilitation) and Member Secretary of the Puducherry State Executive Committee, it was said that the corona curfew will be in force from 10 pm to 5 am. In the current order, liquor shops have been allowed to open from 9 am to 5 pm.

Bihar
Lockdown ends in Bihar from Tuesday, night curfew will continue – Bihar government has ended the lockdown issued since May 5 in view of corona virus infection. Chief Minister Nitish Kumar tweeted on Tuesday and said, ‘Corona virus infection has decreased due to the lockdown. Therefore, night curfew will continue from 7 pm to 5 am, ending the lockdown. Government and private offices will open till 4 pm with 50 percent attendance. The opening period of shops will be extended till 5 pm. He said, ‘Online teaching work can be done. Private vehicles will be allowed to ply. This arrangement will be in place for the next one week. Still there is a need to avoid overcrowding.

Gujarat
Hotels, religious places, gyms reopen in Gujarat with some restrictions- The Gujarat government on Wednesday allowed hotels, restaurants, gyms, and religious places to reopen with some restrictions and limited restrictions during the period from June 11 to June 26. Political and other types of programs with attendance were also allowed. Officials said that during this period from 9 am to 7 pm, hotels and restaurants can operate with 50 percent seating capacity. Till now only home delivery of food was allowed, but with the decline in the cases of new COVID-19 infections, the government decided to give some relaxations.

HONOR MagicBook 15 Receives Outstanding Response; Gets Sold out Within Minutes During Its Second...

02/09/2020/3:35:pm
New Delhi: HONOR, the global leading tech brand for the youth, today announced that it has received a tremendous response from consumers for its...

Noted TV presenter Larry King died at the age of 87