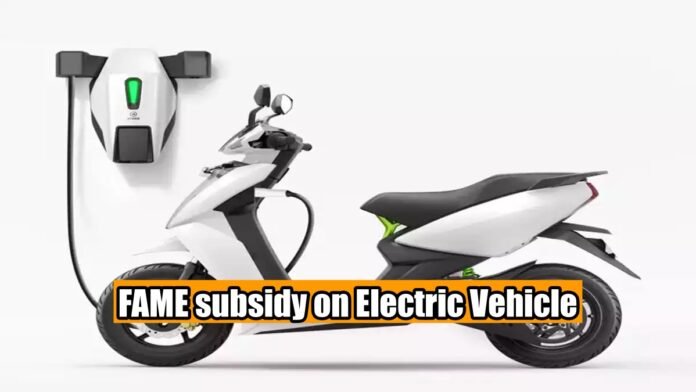 New Delhi: The sale of electric vehicles has increased rapidly in the Indian automobile market. People are also liking them and the government is also giving huge subsidy to promote EVs. But now news has come to the fore that some companies are manipulating these subsidies. According to the exclusive information received from sources by CNBC and News18, after complaints of irregularities in the FAME subsidy given by the government, now the government has temporarily banned the subsidy of 5 companies and they are being audited. Is.

In such a situation, there will be a big question in front of you that what is FAME subsidy and how do you get benefit from it. Let us tell you in detail what is fame subsidy and when and why the government started it.

Then came FAME 2
After 2019, along with the manufacturing of electric vehicles, sales also increased. People liked them and the government introduced the second phase of fame subsidy i.e. FAME 2 in 2021 to further promote it. This time the amount of subsidy was increased and it was made from ten thousand to 15 thousand rupees per kilowatt.

How do you get the benefit
The direct benefit of fame subsidy is given to the customer buying the electric vehicle. For example, if you buy a car worth Rs 1 lakh and it has a 2 kW electric motor, you will save Rs 30,000 on it at the rate of Rs 15,000 per kW. That means you will have to buy a vehicle worth Rs 70,000. At the same time, its payment to the company will be done by the government.

01/02/2022/8:45:pm
New Delhi: Finance Minister Nirmala Sitharaman presented the general budget on 1 February 2022 on behalf of the Modi government. In the budget of...

16/09/2021/10:12:am
New Delhi: International Day for the Preservation of the Ozone Layer is celebrated across the world on 16 September every year. The United Nations...

FIFA world cup 2022: England in quarterfinals,last 8 for the 10th time

What is significance of Sharad Purnima? Donate ‘these’ items according to...