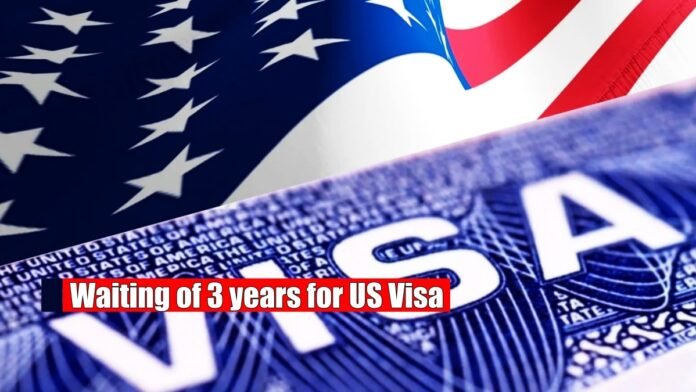 New Delhi: If you are thinking of going to America after getting a business and tourist visa, then there is bad news for you because Indians will have to wait not months, but years for the appointment of an American visa. Indians have to wait for a long time, up to three years, for US visas – B1 (Business) and B2 (Tourist). According to official statistics, the waiting time for Indian applicants looking for a US visa is close to 1000 days.

Searching on the website of the US State Department shows that as of today i.e. 23 November, the waiting time for a B1/B2 visa interview is 961 days. Let us tell you that India has been raising the issue of the long waiting periods for an American visa in front of America. In response, America says that India is the number one priority for America (in terms of issuing visas).

Explain that in September, External Affairs Minister S Jaishankar visited the US and during that time he raised the issue of a backlog of visa applications with US Secretary of State Antony Blinken. On this issue, a top American diplomat said that he is very sensitive to this issue and he is facing a similar situation around the world, which is a challenge caused by Kovid.

According to a senior official of the US Embassy, ​​the waiting period for issuing US visas is likely to decrease by the summer of 2023 and the number of visa applications is expected to reach around 1.2 million. The official said that India is the number one priority for the US (in terms of issuing visas). Our aim is to bring the situation to the pre-Covid-19 level by the middle of next year.

India is one of the few countries where applications for US visas have seen a significant jump after travel restrictions related to the coronavirus was lifted. The official said keeping in mind the long waiting times for granting visas, the US is taking several initiatives, including hiring more personnel and increasing ‘drop box’ facilities. He said that there is a plan to issue about one lakh visas every month. America has issued about 82,000 visas in the last year.

13/08/2020/11:10:am
New Delhi: Union Minister Ramesh Pokhriyal Nishank said that under the new Education Policy (NEP), universities will not be able to recognize more than...

13/03/2021/9:18:am
Washington: After the first top level meeting of the Quad countries, now America, Japan, Australia and India will meet again this year and this...

10/07/2022/10:23:am
Pakistan: The presenter in a major Pakistani television channel has been released. Who was arrested earlier this week near Islamabad? The High Court granted...

CBSE Board 10th Class students will pass without exam, know the formula

Patients of Delhi have symptoms, check whether you have also got...

Ukrainian officials lost to Russia in India, FSAAA turned down the...