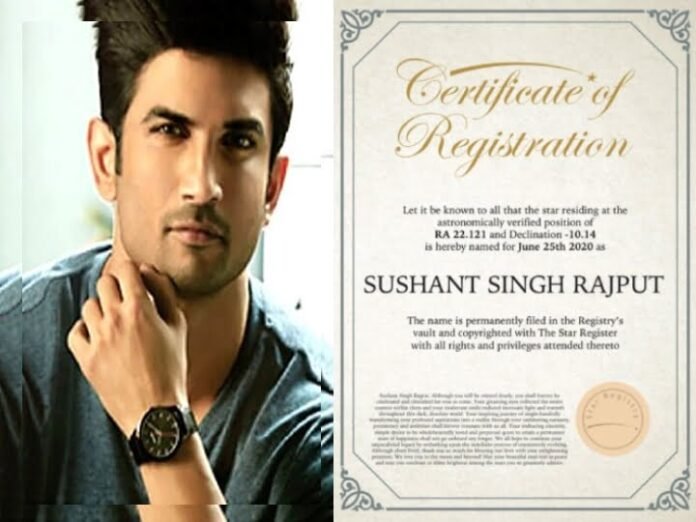 A fan register a star name of Sushant Singh Rajput certificate viral on social media
Everyone is hurt by the sudden death of Sushant Singh Rajput. His fans are sharing his memories, photos and videos on social media. Fans want to preserve their memories. As we all know that Sushant had a lot of interest in science, space and stars along with films. Sushant also bought a very expensive telescope to see them. Now news is coming that a fan of Sushant has got a star registered in his name.

See the copy of the certificate here

Please tell that Sushant Singh Rajput had committed suicide at his home in Mumbai on 14 June. His post-mortem report also revealed that he died of suffocation due to hanging. Poison or some suspected chemicals were also not found in his viscera report. Police have questioned 29 people so far in Sushant Singh Suicide case.

20/09/2021/9:04:pm
Mumbai: Sony TV does not want to miss any opportunity to entertain its viewers. Recently Sony TV has announced the launch of another popular...

Russia has violated spirit of the Charter of World Organization: Biden

Taliban showed ‘true colours’, women will have to wear burqa covering from head to...

07/05/2022/11:10:pm
Kabul: Afghanistan's ruling Taliban on Saturday ordered women to be covered in burqa from head to toe in public places. Along with this, the...

10/07/2022/9:54:am
New Delhi: In Sri Lanka, where demonstrators protested the deepening economic and political crisis, on Saturday, exactly 116 days after, they took over the...