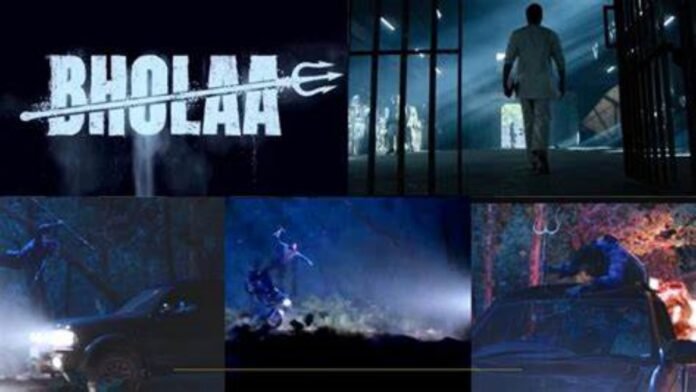 Ajay Devgan’s look in the teaser looks quite intense. Ajay Devgan is in full on action mode with the Trishul. Ajay himself has shared the teaser of the film on his official Instagram. Along with this, he wrote in the caption ‘When a rock collides with a hundred devils’. Bhola teaser 2 out. Fans are very fond of this teaser of Ajay Devgan. He is looking very excited about the film. One person commented and wrote, ‘Ajay Devgan is making remakes of movies, but making them in a very cool way.’ While another wrote, ‘3 National Award winning actor Ajay Devgan another blockbuster film.’

Ajay Devgan seen in intense look
Let us inform that earlier Tabu’s look was also out from the film in which she was seen in police uniform. His look was also very spectacular and dashing, which was well-liked by the fans. Talking about the film, Ajay Devgan himself is directing this film. Tabu will be seen opposite him in this. Once again, fans will get to see the superhit pair of Drishyam together. Deepak Dobriyal, Sharad Kelkar, Makarand Deshpande and Sanjay Mishra will be seen in it. Ajay’s film is a remake of South Movie Kaithi. This film will be released on 30 March 2023.

Us preparing to curb export of semiconductors, artificial intelligence, and chipmaking tools to China

12/09/2022/2:31:pm
Washington: US President Joe Biden is preparing to curb exports to China of semiconductors used for artificial intelligence and chipmaking tools from next month....

19/03/2022/10:16:am
Washington: Russia is continuously conducting airstrikes on Ukraine. Russian forces have already entered several cities in Ukraine. Friday is the 23rd day of the...

27/02/2022/9:55:am
New Delhi: According to news, US President Joe Biden has now nominated Ketanji Brown Jackson to serve in the Supreme Court. Significantly, this will...

Google giving electric scooters to employees, provided they come back to the office

09/04/2022/2:25:pm
New Delhi: Google is urging its employees to call back by ending work from home. For this, the company is reportedly offering electric scooter...