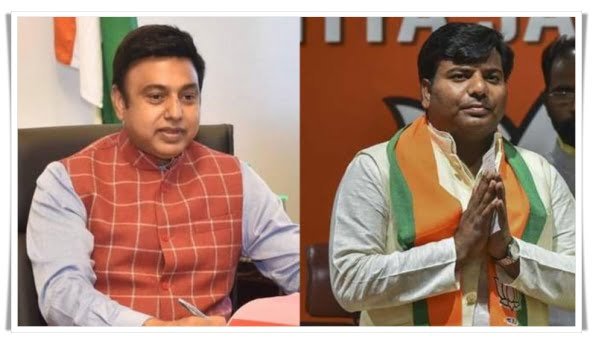 Lucknow: In Uttar Pradesh, after the encounter of Bhartiya Janata Party criminal Vikas Dubey, the resentment among the Brahmins and not giving much pressure to the opposition is showing up on their former agenda. In an effort to replicate the results of the previous assembly and Lok Sabha, the BJP is busy preparing its next strategy on the same lines.

Jai Prakash Nishad, who belonged to the first backward class unopposed on the Rajya Sabha seat vacated after the death of Beni Prasad Verma and Amar Singh, who were among the first strong leaders of Uttar Pradesh, was sent to Rajya Sabha and now Amar Party spokesperson Dr. Zafar Islam has been made his candidate from the seat vacated by Singh’s death. It wants to maintain a partial breach in the Muslim faith after the agenda of its Dalit and backward and the issue of triple talaq. Now, as a Rajya Sabha member, the tenure of these two will be till July 2022 and now the Uttar Pradesh assembly elections will also be held in 2022.

The by-election will be held on September 11 on the seat vacated by the death of Amar Singh. The Election Commission has announced this and the notification has been issued. Let me tell you that on 1 August 2020, he died after a long illness in a hospital in Singapore. Zafar Islam’s uncontested election is set for the by-election. The BJP is in the government with a strong majority in the state, so it is possible that no other party candidate can be fielded. After the formal announcement of nomination and election, he will be the only Muslim MP of BJP from UP. BJP candidate Jai Prasad Nishad was elected unopposed from the seat vacated after the death of Beni Prasad Verma.

The opposition probably did not fill the form keeping in mind the number force, so the BJP candidate’s uncontested victory was almost certain. Right now, the same situation is for the election of Zafar Islam, in which they are almost certain to be elected unopposed. Let us tell you that BJP has 306 MLAs in the 403-member state assembly. After that there are 48 MLAs of SP, 18 of BSP, 9 of Apna Dal (Sone Lal), 7 of Congress, 4 of Sulehdev Bharatiya Samaj Party, 3 Independents and 1-1 MLA of Rashtriya Lok Dal and weak Indian Shoshit Hamara Apna Dal.

Zafar’s name for the Rajya Sabha from UP is not just a reward, but a part of the political strategy of the BJP, and after the announcement of sending Zafar Islam from UP to Rajya Sabha, the reward of bringing Jyotiraditya Scindia to BJP in social media and public As seen in the political circles of Uttar Pradesh, the case is different. Zafar Islam, who joined BJP seven years ago, is considered very close to Prime Minister Modi and in these seven years he has emerged as an outspoken and liberal Muslim face of BJP. The BJP’s move to maintain the Muslim vote in the state after three divorces and bridge the gap of opposition to the CAA after three divorces is seen in the Uttar Pradesh assembly elections to be held after about one and a half years.

Let us tell you that the BJP has recently made Dr. Zafar Islam its candidate for the by-election in a Rajya Sabha seat of UP vacated after the death of Amar Singh. Islam played a major role in bringing former Union Minister Jyotiraditya Scindia into the BJP, destabilizing the Congress government headed by Kamal Nath in Madhya Pradesh. About six months ago, in the midst of the political turmoil going on in the Madhya Pradesh government, with the support of Jyotiraditya Scindia, the strong leader of the Congress and his supporting legislators, the BJP was again preparing to take over the state’s power. After that Jyotiraditya Scindia left the Congress and formally joined the Bharatiya Janata Party.

Experts tell that Zafar Islam had extended Scindia’s offer to join BJP to the party high command. Only after this, the exercise to bring Jyotiraditya to BJP and the script of ‘Operation Lotus’ was written in Madhya Pradesh. In this entire operation, only logistic and other assistance was provided by the BJP. The entire operation was conducted according to Jyotiraditya and Kamal Nath and the Congress Party kept watching.

Jai Prakash Nishad sent a message to Dalits and backward in Purvanchal
Before Jafar Islam, BJP had sent Jai Prakash Nishad to Rajya Sabha from the seat vacated by the party’s original cadre leaders from the seat vacated by Beni Prasad Verma. The original leaders of the party cadre started speaking in a loud voice, but the party bypassed all these and sent Nishad to Rajya Sabha and gave a political message to the Dalits and backward. Nishad, who was the Minister of State in the BSP government, joined the BJP two years ago.

Prior to this, Jayaprakash Nishad was also given the important responsibility of the organization as soon as he joined the BJP. He was also the Deputy President of Gorakhpur region of BJP and Chief Minister Yogi Adityanath had appointed him as a member of Purvanchal Development Board and given the status of Minister of State. By making Jayaprakash Nishad a candidate in the Rajya Sabha elections, the BJP has given Nishad voters who play an important role in many seats in eastern Uttar Pradesh.

29/09/2020/10:56:pm
Mumbai: Despite many efforts by the government to boost credit supply by offering many a scheme to MSMEs and other priority sectors, the same...

23/11/2020/8:52:pm
Jerusalem: Israeli Prime Minister Benjamin Netanyahu met with Crown Prince Muhammad bin Salman of Saudi Arabia. This information has been given in the news...

14/04/2021/12:13:pm
New Delhi: The second wave of Coronavirus continues to wreak havoc in the country. Corona is breaking its record every day. For the first...