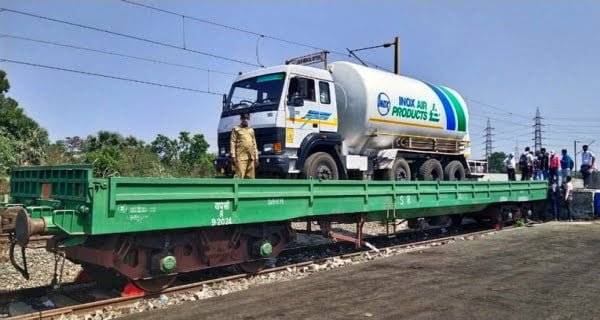 New Delhi: The second wave of Coronavirus in the country has become completely uncontrollable. Millions of cases are being reported every day. At the same time, the death toll is also increasing rapidly. Every day new cases have created panic all around. In many parts, it is seen that patients are dying due to a lack of oxygen and oxygen beds. In such a situation, Indian Railways has decided to run ‘Oxygen Express’. Through which oxygen can be supplied throughout the country.

The official said, “Railways will run ‘Oxygen Express’. In the next few days, liquid medical liquid and oxygen cylinders will be transported across the country through ‘Oxygen Express’. ” He said that, “The governments of Madhya Pradesh, Maharashtra approached the Railways and asked them to consider transportation of liquid medical oxygen tankers. After which the railways has taken this decision. “

Railways said, “Empty tankers from Maharashtra will operate on Monday to pick up oxygen from Visakhapatnam, Jamshedpur, Rourkela, Bokaro.

In this corona period, many state hospitals are witnessing a lack of oxygen. Due to this, many states have written a letter to Prime Minister Narendra Modi, demanding that oxygen be available.

162 oxygen plants will be ready
On Sunday, the central government, taking a big decision, announced the establishment of 162 oxygen plants in every state of the country. Out of these, 33 plants have been installed in many states. This information was given by the Union Ministry of Health.

The ministry stated, “162 PSA (pressure swing adsorption) oxygen plants have been approved by the Government of India for installation in public health facilities in all states. These will increase medical oxygen capacity by 154.19 MT. ”

The Ministry of Health stated, “Out of the 162 PSA plants sanctioned, 33 have already been installed – 5 in MP, 4 each in Himachal Pradesh, 3 each in Chandigarh, Gujarat and Uttarakhand, 2 each in Bihar, Karnataka and Telangana. While Andhra Pradesh, Chhattisgarh, Delhi, Haryana, Kerala, Maharashtra, Puducherry, Punjab and Uttar Pradesh have been built one each. ”

26/09/2020
Patna: The political stir in the Bihar Assembly Election to be held in Bihar has intensified. The tussle for the seats in the opposition...

Corona patient first cuts the veins of the hand, then jumps from the...

10/08/2020
Gwalior: In Gwalior (Madhya Pradesh), Corona-positive patient jumped from the third floor of the hospital and tried to commit suicide. The patient first went...