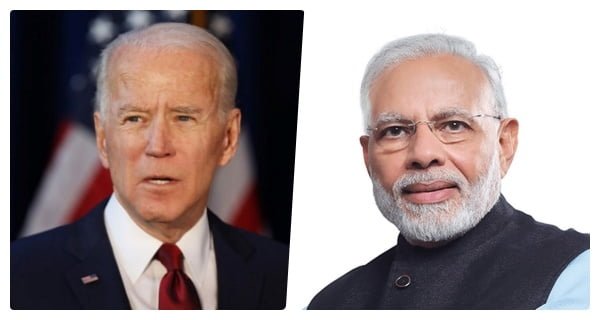 New Delhi: According to news, Prime Minister Narendra Modi and US President Joe Biden will meet at the White House on September 24. Let us tell you that Biden was sworn in as President on 20 January 2021. After this, this will be the first time that he will have this face-to-face meeting with the Prime Minister of India.

However, so far 3 virtual meetings have taken place between the two. In the same sequence, the White House has confirmed the meeting to be held late Monday night this week. According to the schedule, Prime Minister Modi will now also meet Vice President Kamala Harris on 23 September.

Highlighting the schedule of Prime Minister Modi, he said that the Prime Minister will leave for America tomorrow morning and will return to India on 26 September. He will be accompanied by a high-level delegation including External Affairs Minister, NSA. Key elements of the program will be the first in-person meeting with the US President, the Quad Leaders’ Meet, and the UNGA.

Along with this, Foreign Secretary Harsh Vardhan Shringla said that, in their bilateral meeting on September 24, PM Modi and US President Biden will review India-US relations. They are expected to discuss ways to strengthen trade and investment ties, strengthen defense and security cooperation, promote clean energy partnerships.

Security will also be discussed
Along with this, according to the Ministry of External Affairs, many important issues will also be discussed in this important meeting of Quad. These will include new technology, cyber security, ocean security, humanitarian aid, and disaster management, as well as important and urgent issues like climate change. At the same time, in this meeting, an effective strategy regarding China’s attitude can also be considered necessary. Let us tell you that China is again presenting a common challenge for the quad countries.

11/04/2021/7:50:pm
Srinagar: Four militants of terrorist organizations Lashkar-e-Taiba and Al-Badr were killed in two encounters with security forces in Jammu and Kashmir. Among these slain...

01/09/2020/9:53:pm
Mumbai: After defeating Corona, Bollywood megastar Amitabh Bachchan has returned to his work and has started shooting for KBC. Meanwhile, another car has been...

After years of hard work, Hindu-Sikh community got a special place for bone immersion

25/09/2020/11:16:pm
Mumbai: Controversies have started one after another in Bollywood for the last few days. The industry is divided into two parts. Sometimes debate about...

Due to impact of Corona, 235 million people will need...