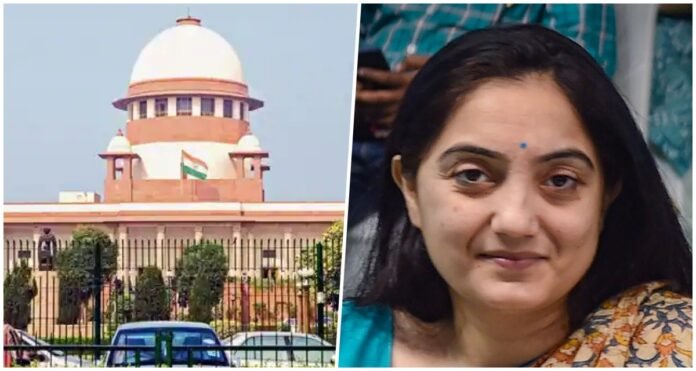 New Delhi: Former BJP spokesperson Nupur Sharma has been reprimanded by the Supreme Court for her alleged remarks on Prophet Mohammad. The Supreme Court expressed its displeasure for the remarks about Prophet Mohammad, commenting that due to the rhetoric of Nupur Sharma, a sad case like Udaipur has come to the fore. She is the spokesperson of a party, it does not mean that she can speak anything. The court remarked that we have seen the TV debate. Tried to provoke him, but what he said after that is shameful. He should apologize to the whole country on TV.

The Supreme Court further said in its remarks that Nupur Sharma’s statement has provoked the sentiments of people across the country. He is responsible for whatever is happening in the country today. The court further said that do not open our mouths about what the police have done. He should now appear before the magistrate. This comment shows his arrogant attitude. If she is the spokesperson of any party then she will not get the right to say anything. The court said that those against whom Nupur Sharma complained were arrested, but nothing happened to Nupur Sharma.

It is worth noting that during a TV debate regarding the alleged Shivling found in Gyanvapi Mosque in Varanasi, Nupur Sharma had allegedly made controversial remarks against Prophet Mohammad, due to which he was criticized. After this, the BJP suspended the national spokesperson Nupur Sharma. Not only this, the party’s Delhi unit’s media chief Naveen Kumar Jindal was also expelled for the alleged remarks.

It is pertinent to mention here that Delhi Police has filed FIRs against Nupur Sharma and Naveen Jindal, AIMIM chief Asaduddin Owaisi, controversial saint Yati Narasimhanand and others for allegedly posting and sharing messages inciting public peace and disturbing public peace on social media. have been registered. According to the police, all of them have been booked under sections 153 (intentional abetment with intent to provoke riot), 295 (insulting places of worship with intent to insult any religion), and 505 (making public mischief-making statements) of the Indian Penal Code. Cases have been registered. One case has been registered against Sharma and another against several social media organizations including Owaisi, Jindal, Narasimhanand, Shadab Chauhan, Saba Naqvi, Maulana Mufti Nadeem, Abdur Rehman, and Gulzar Ansari, the official said.

PAN-Aadhaar Linking Deadline Extended: You Should Do This Soon to Get Income Tax Benefits

WHO warns: Corona deadly wave in West Asia, sanctions need to be tightened

20/11/2020/10:26:am
Dubai: The Regional Director of the World Health Organization (WHO) has said that with the onset of winter, cases of Corona Virus infection are...

New feature coming on WhatsApp, chatting of users will be easier...