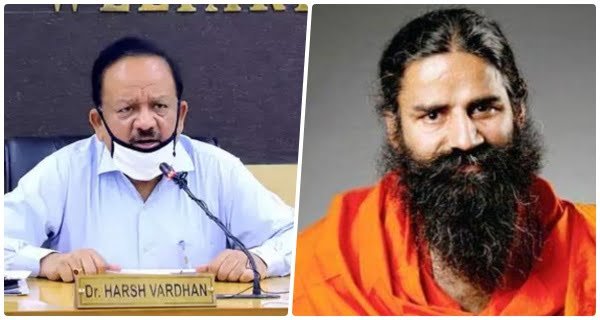 New Delhi: Union Minister for Health and Family Welfare Dr. Harsh Vardhan Sunday wrote to yoga guru Ramdev over his remarks on allopathic medicine calling it a ‘stupid science’ and said that his words were not only insulting to scores of Covid warriors but were hurtful to the citizens too.

“Your words have hurt and insulted the Covid warriors who have been at the forefront of the fight against the pandemic and are risking their own lives to save others. At a time when modern medicine has saved numerous lives, what you said is especially unfortunate,” Dr. Vardhan wrote.

The Indian Medical Association (IMA) had on Saturday sent Ramdev a legal notice and demanded that the Centre take strict action against him for allegedly misleading people by making “unlearned” comments.

Citing a video circulating on social media, the IMA said Ramdev has claimed that allopathy is a “stupid science” and medicines such as remdesivir, faviflu, and other drugs approved by the Drugs Controller General of India have failed to treat COVID-19 patients. The doctor’s body also quoted Ramdev as saying that “lakhs of patients have died after taking allopathic medicines”.

Reacting to the controversy, Patanjali Yogpeeth Trust denied the statement and said, “the truncated version of the video is totally out of context of what is sought to be conveyed by Swami jee.”

“Swami jee has no ill-will against the modern science and good practitioners of modern medicine. What is being attributed against him is false and nugatory.”

Calling our the yoga guru for his alleged remarks, Dr. Vardhan reminded him of the countless doctors, nurses and medical staffers who had themselves succumbed to the virus while treating patients.

“Thousands are going home after recovering from Covid-19. If today India’s death rate is 1.13 percent and recovery rate over 88 percent the credit goes to allopathy and its doctors. I hope you will take your offensive and unfortunate statement back,” he said in the letter.

15 crore to become extremely poor by 2021 due to Corona epidemic: World Bank